The most fascinating aspect of Godzilla versus Kong is the Hollow Earth. 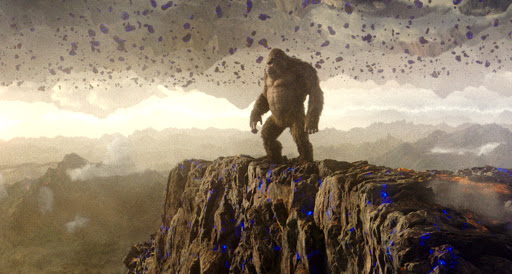 Godzilla versus Kong landed on HBO Max on Wednesday. So, naturally I decided to watch it that evening. There are spoilers ahead in this post, so take this as your one and only warning and head out if you plan on watching it, and do not want to know any details.

As kaiju films go, I enjoyed this one. However, the people who I watched it with may not have permitted themselves to like the film as much as I did because it was just too stupid. I know that a movie that has a gargantuan radioactive lizard fighting a super ape on an aircraft carrier in the middle of the ocean is not high cinema. But these folks wanted explanations of most things, which I just decided for myself did not need answering.

But, this isn't to say that I don't have questions. On the contrary, there were so many things I saw in the two hour running time that I want answers to, that it creates a kind of frustration in me. This movie, Godzilla versus Kong, felt very much like the end of a story that started with Godzilla a few years ago. And I don't think that Legendary pictures may make more of these, especially given that Godzilla: King of the Monsters was a box office disappointment and Godzilla versus Kong is not going to be breaking any box office records with the country in the grip of the fourth wave of Covid 19.

So here are my questions that I may never get answers to:

1) So the Hollow Earth is a planet within a planet, and it is apparently the ancient home of King Kong's people. Furthermore, Kong's people had a civilization. The place where Kong found the ancient axe of his ancestors looked like it was a throne room surrounded by stadium seating for other massive gorillas of his kind. What happened to those people?

2) What other kinds of kaiju are there in this Hollow Earth? We saw a huge snake like thing with wings like leaves. I'd like to see more of the kaiju that populate this incredible place, where the sky is filled with mountains.

3) Where does the Hollow Earth get its light? There was sunlight down there, and atmosphere. I'd kind of like some crazy fantastical explanations for that, because it is cool.

4) Who made that axe? It looks like it has a blade that is a dorsal fin from a creature the same as Godzilla. Was it an ancestor of Godzilla?

5) Back on the topside (Earth) I have questions about Mecha-Godzilla. Specifically, did they put King Ghidorah's soul in the Mecha-Godzilla? Is that why it went crazy?

6) Godzilla's breath weapon can burn all the way to the Earth's core. That means that Godzilla could literally destroy the Earth if it wanted to. Is it the intention of the makers of these films to suggest that Godzilla is that powerful?

All in all, I enjoyed the film and thought it was too short. I wished they had taken some more time with it, and really showed us/taken us on a tour of the Hollow Earth. That was a fascinating place, and it seems like a bit of a missed opportunity.

Posted by Michael Offutt, Phantom Reader at 7:40 AM