Even if its visuals are terrible by modern standards Babylon 5 is still a series that is worth watching. 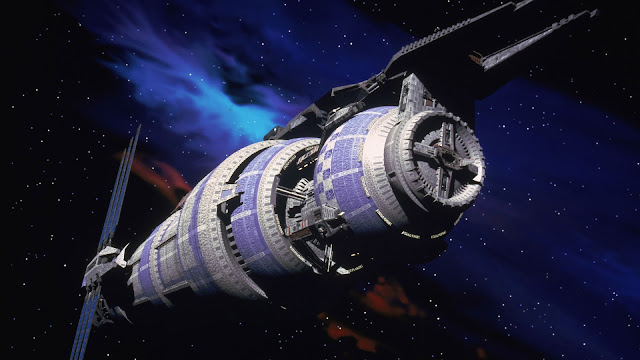 I stumbled across Babylon 5 the other day while looking for something to stream on the t.v. while I painted on my 3D printed Samurai/Japanese Castle that I ordered. I had watched the series back in the 90's (yes, I'm that old), and I remembered that (at the time) I thought it was really good. In rewatching it, I'm still impressed by its story, and the things that it tried to do for science fiction. I think it's an amazing series, yet there are (of course) some things that haven't aged well.

By today's standards, the visuals are terrible. Additionally, the costumes and alien designs are creative, but they would not hold up to the things that we see in a series like Game of Thrones. At the same time though, the alien ship designs are so imaginative that I wonder what they would look like if this series was rebooted for a modern audience by something like Netflix or HBO Max.

The real strength of Babylon 5 is the way that it is one continuous story. It isn't episodical like its contemporary, Star Trek: The Next Generation. And the first four seasons are all a slow boil for the Shadow and Vorlon war whose story is visited through the use of time travel and the fate of the Babylon 4 station. Furthermore, the time travel shows the effects that the Babylon 5 crew has on the history of the galaxy. You get to see aspects from characters in the first season which are only answered in season four.

I think what I like most about what Babylon 5 gave to us is that the whole story was plotted thoroughly (all of its seasons), before they even started to film the first episode. This is actually what made Game of Thrones great. The whole thing (more or less) had been plotted out by George R.R. Martin, whether or not he'd actually finished writing any books. He still had the lore and his notes, and he knew who was going to end up on the Iron Throne. The same goes for Babylon 5.

And the people who put up the funding for shows in today's world (of 2021) could learn a thing or two from Babylon 5. For one, the specter of renewal makes a lot of shows suck. Every season that is produced could be the last in the series, so a lot of shows cannot take the risks that Babylon 5 did in order to tell its story. At the same time, the invention of the 13 episode season (I think) has been a good one for television as a whole, because it has forced writers to cut out filler episodes that usually made for a 22 episode season. So now you get a lot more tight storytelling, and as a result, each episode of a good series is typically "movie level" quality.

Anyway, I've been enjoying revisiting the series, and I was quite overjoyed to see that it was available to stream on HBO Max. Anyone else here a fan of Babylon 5?

Posted by Michael Offutt, Phantom Reader at 6:50 AM

Email ThisBlogThis!Share to TwitterShare to FacebookShare to Pinterest
Labels: Babylon 5, Even if its visuals are terribly by modern standards Babylon 5 is still a series worth watching