The Mortal Kombat movie on HBO Max didn't take enough time with its characters to allow us to feel anything for them. 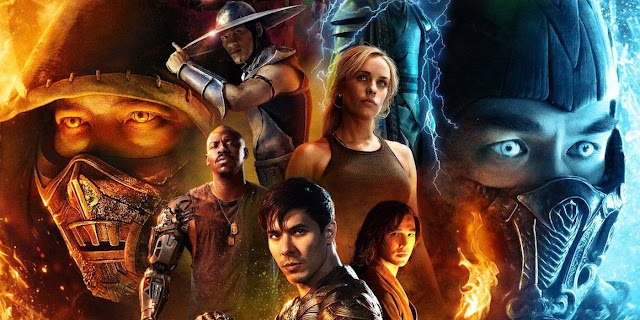 I watched the latest edition of the Mortal Kombat movie, and it was entertaining. But it also wasn't good. As pointed out by a friend, the fighting was mostly good computer generated graphics/images. However, the dialogue and the story were very sub-par. They did try to insert lines from the video game to pay homage to their source material, but these attempts mostly came across as cheesy and stilted. Examples were Kung Lau saying, "Flawless Victory," and Kano declaring, "Kano Wins!" Kano (although I don't like the character) was easily the one that had the most personality in the show. Everyone else was either a bad actor, or they were concentrating on being broody and serious and had no time for things like emotion.

They also left the storylines behind and had the characters trying to kill each other off before the actual tournament started. The movie never actually made it to the iconic tournament at all, preferring to have its battles in many regular world locations. As an example of this, Sonya fought Kano in her mobile home trailer park. So, although I was impressed with the appearance and the diversity of the cast and their dedication to martial arts and these characters, the script kind of sold them short.

But rather than say, "Video games are difficult to adapt to make good movies," I want to take a moment and explain why I think Mortal Kombat could be a great movie if the person with the right vision and talent came along to fix it.

Also, I'm not saying that this person is me. I know next to nothing about what it takes to make a movie. However, I have ideas regarding this franchise and why it is failing. So here goes...here's what I think is wrong with all of the movie adaptations thus far and how I would go about fixing them, were I to be a paid consultant.

Mortal Kombat has an enormous storyline. It is easily as complicated as The Lord of the Rings and as nuanced as Marvel, with many characters intertwining with others to form entire story arcs. So, why are directors and movie makers trying to hammer all of that into a 90-120 minute film? This is one of those times where you want to give each character (or a couple of intertwined characters) their own movie first. Sonya Blade and Jax should have their own movie. Liu Kang and Kung Lao should also have their own movie. The same goes for Sub-Zero and Scorpion. Shang Tsung should have his own movie as well as Johnny Cage, Katana and her sister Melina, and Baraka and Kano. Each of these characters has a fascinating storyline, and the characters should be approached as superheroes (or villains) and not as video game characters. We can make Captain Marvel look cool shooting beams of energy out of her hands, because it's a slow build to the reveal and it is handled in a really cool way. Maybe the same kind of delicate hand should be used with Sonya Blade, so that we slowly buy into these characters and they don't come across as cheesy.

It could also be explored in television via the same way that Disney Plus has gone with its characters like the Falcon and the Winter Soldier. A mini-series devoted to telling the story of Sub-Zero and Scorpion (easily the best part of the Mortal Kombat movie that is shown in the first 7 minutes). The story also needs time to develop Raiden all by his lonesome, so that he is shown to be connected to the protection of Earth. This would be similar to a Thor treatment, where Raiden gets his entire own movie (or a mini-series) to develop his powers and show what he can do.

What I'm saying in all of this is that the Mortal Kombat adaptations are not taking enough time to allow the story of the huge tournament to unfold. It's a great idea, and I think it would make a fantastic film if the directors of these movies would just slow down and let us get to know these characters before they are trying to kill each other. There's enough of a fanbase to this that I think it could be really popular. Who knows? Maybe it could even be the next big franchise outside of Marvel.

Posted by Michael Offutt, Phantom Reader at 7:36 AM

Email ThisBlogThis!Share to TwitterShare to FacebookShare to Pinterest
Labels: Mortal Kombat, The Mortal Kombat movie on HBO Max didn't take enough time with its characters to allow us to feel anything for them