I kind of like the character of Sharon Carter now. 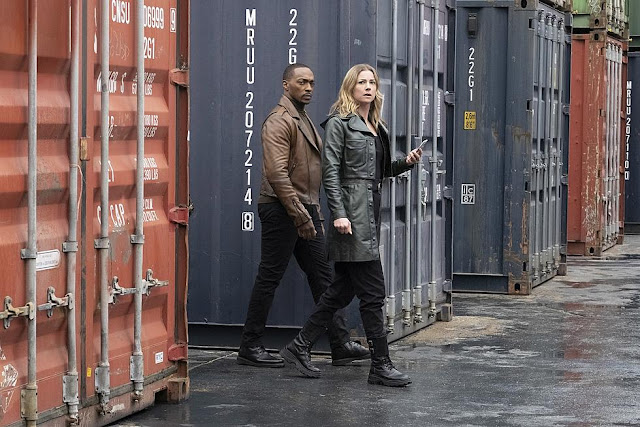 Here's your obligatory warning that there are spoilers for The Falcon and the Winter Soldier ahead.

I just finished watching The Falcon and the Winter Soldier on Disney Plus. I enjoyed it less than I did WandaVision. However, I still liked what happened in the show. And I think it's because of Sharon Carter's heel turn. Honestly, before this mini-series, Sharon Carter was a nothing burger of a character. She was the niece of Peggy Carter who was in love with Steve Rogers. She did share a little on-screen heat with Steve Rogers, but it was brief and made awkward by the fact that we all knew that Steve Rogers had been in love with her aunt. Being long lived and more or less in possession of a version of eternal youth, that seems to be a problem for the gods of Marvel more than its mortals.

That being said, we all need to remember that S.H.I.E.L.D. is toast. In it's place is S.W.O.R.D. So Sharon's whole purpose for even being in the story was gone. The previous storyline from Civil War also made this woman an enemy of the state. Sharon was a wanted woman because she stole the Captain America shield and the Falcon flight suit to aid Rogers and Wilson as they rebelled against the Sokovia Accords to protect Bucky Barnes. And then she got blipped. When she came back, she had to run. Sam and Bucky were pardoned and she wasn't. Hawkeye and Antman got deals, and she didn't. I love that she's possibly harboring a lot of bitterness and rage at this point.

Under circumstances like that, it's understandable for this character to take a dim view of patriotism and become increasingly disillusioned and self-interested. Sharon's turn as a potential villain now (the Power Broker) is a welcome change. The MCU has been wildly successful at creating an interconnected universe, but it still often feels like consequences of individual movies don't really affect events down the line. Tony and Bruce destroyed entire city blocks, and the only consequence to them was that they had to fill out a little more paperwork before beating up the bad guys going forward.

I hope that we see Sharon in future movies, camping it up a bit, with a "Live, Laugh, Love" sign in her office, organizing Hawaiian Shirt Fridays, and stuff like that...all while selling out and undermining the country that stabbed her in the back. It'd be cool if she ends both Bucky and Sam in some good story arcs. However, she will probably get some powerful repercussions once the full depth of her treachery has been brought to light. In any case, she is now a very interesting character, and I like it.

Posted by Michael Offutt, Phantom Reader at 8:38 AM

Email ThisBlogThis!Share to TwitterShare to FacebookShare to Pinterest
Labels: I kind of like the character of Sharon Carter now, The Falcon and the Winter Soldier