I collect 3D terrain. I recently purchased a "Samurai Castle" off Etsy. They come unpainted, and they are printed by people who own 3D printers. I don't want to own one because they are bulky, temperamental, and make a lot of noise. The one that we have at work is whining pretty much all day long, making a low-key electronic squeal as it moves around the bed squeezing out hot plastic. The thing's got to be kept at a precise and relatively perfect temperature, or the plastic unlatches from the bed which then causes a huge mess. Anyway, it's much easier to purchase from people willing to do all the trouble and just get the finished product from them.

Most of the terrain that I own is "Western-themed" as that is the most popular. So the items I've been purchasing off Etsy are "Japanese" flavored, and I'm going to have fun painting this castle (I'll attach pictures below). I received it yesterday in a big box and then last night I primed it. So tonight I should be able to start with the painting. I'm going to use the paint scheme of Himeji castle, which is a famous landmark in Japan. 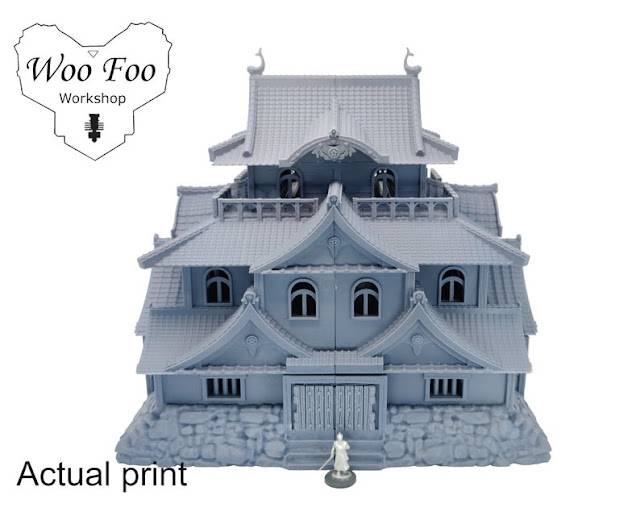 Above is what my castle looked like out of the box, only it was in brown plastic and not gray. The color of the plastic doesn't matter as I'm priming the whole thing and painting it with a brush anyway. It doesn't look that big in the picture, but it is rather large. The small model in front of the door is just a little over an inch tall. The guy I bought it from on Etsy wanted to sell me a whole foundation for it, which was about three times the above size. I wasn't interested because 1) that's a lot of stuff to paint, 2) I didn't really like the design of the huge base it sits on and 3) I think it would have trouble fitting on a regular kitchen table, which is what I use when we play our D&D games.
And on the "painting the model" front, this is actually the biggest project I have done to date with brushes. I don't want to buy anything else until I get this one done to kind of discipline myself and force myself to complete one project before I move onto something else. I think that it will probably take me weeks of time to paint during the evenings if I want to get all of the details just right. Painting is relaxing for me, so I'll just put on some nice music and as the days get longer and warmer, I'll probably leave a window cracked while I paint away.
However, I do have my eyeball on future projects. Should I finish this castle to my satisfaction, I'd like to purchase some of the accessories for it that can be 3D printed. Below is a gatehouse that would look amazing all painted up. 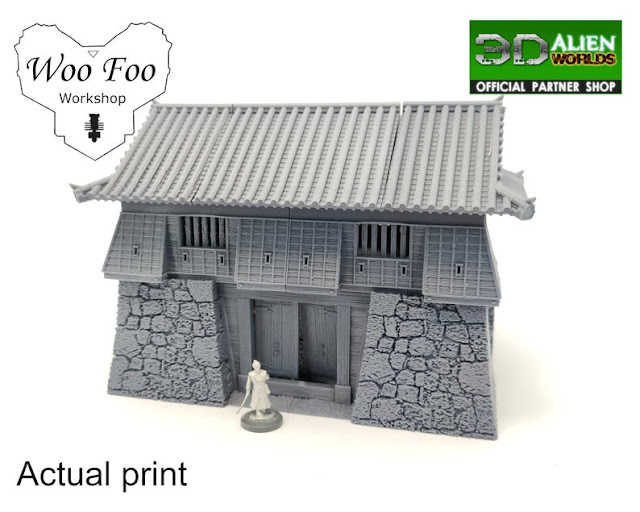 I think this gate would look so cool all done up in nice matching colors. Oh and if you aren't aware, all of these models come apart so that you can put stuff on the inside. The interiors are fully detailed down to the tatami mat borders and threads of the rooms. They are fantastic. To go with the above gate there are Samurai castle towers and walls so that you could enclose the thing if you wanted to. Here's a shot of the towers. 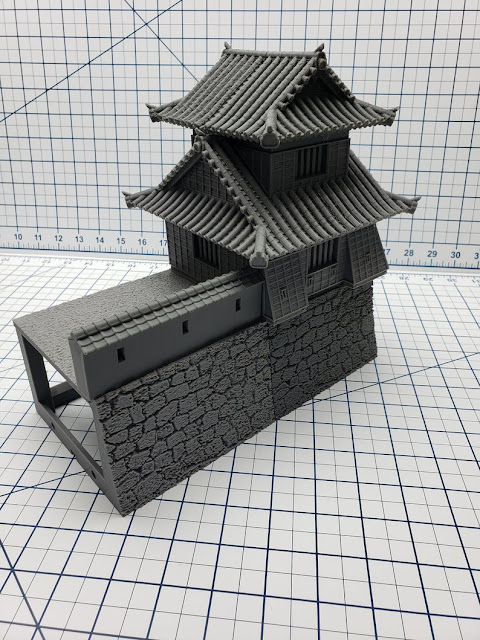 These obviously would go on the corners. Anyway, I'm not going to buy either the gate or the tower until I finish the main project, which is the castle itself. Below is a picture of Himeji castle in Japan, and I'm going to paint my castle in the same color scheme. 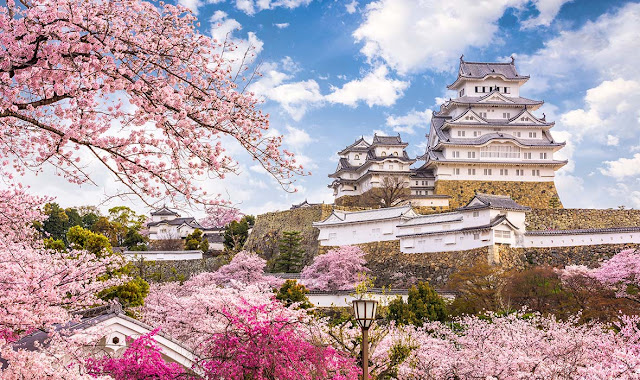 Obviously, my 3D model will never look this grand. However, it will still look cool as I have other terrain pieces to go with it, including a nice looking foundation and cherry trees. I think the diorama (when it is completed) will look quite beautiful.