I'm in awe of the writers who finish a series that is so huge it staggers my mind to think about the length of it. 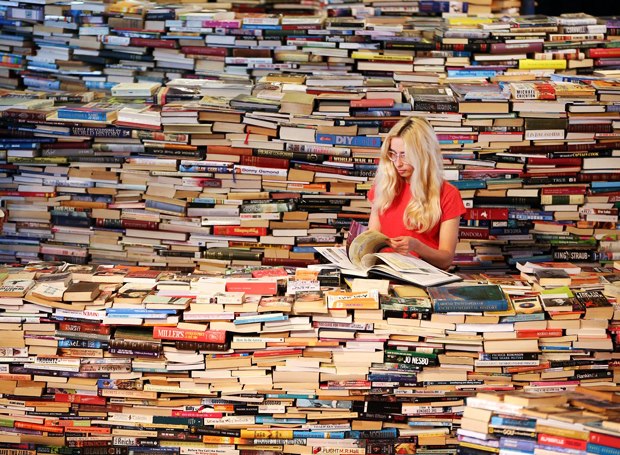 I am a little in awe of stories that seem to never end. I'm also using hyperbole when I say that these stories don't end. It just seems that way, because authors I've been following have continued writing sequels to their fantasy stories that stretched way beyond anything that I could have envisioned in the past when I first found these writers, read a book, and then said, "Hey, this is pretty good. Is there any more?"

Tolkien left off with (pretty much) his famous trilogy and then a bunch of seed stories that he created in The Silmarillion. To me, these "seed stories" all sounded like something much bigger than I could ever take on. I just wanted to write a few books, and then my story would be finished. I was thinking, "Maybe five books is doable." And then there came along writers like Brandon Sanderson (who writes a book in the time that I take to cook breakfast), and Stephen King who does about the same (but Stephen doesn't so much write in sequels as he does in a shared universe similar to what Marvel does with its movies). I think (as far as sequels go) The Dark Tower stretches to eight hefty novels that could be used as door stops. That's impressive and way beyond anything I could ever do in my entire lifetime I think.

But as far as prolific writers go, it's up there with Robert Jordan (and Sanderson) who wrote a series spanning (I think) fourteen books. That's almost twice what King wrote. Admittedly, Jordan died during the writing of it, but still...it's impressive. And then there's Raymond E. Feist who wrote 30 books all in the same series (I'm on number 25 I think). That was kind of a jaw-dropping number when I stumbled across how many books he'd published in the time since my childhood (when I first discovered him), and there were only four in the series (and I had enjoyed them).

Well, I took a gander at what Terry Brooks has been up to since my college days when i had finished a book called The Elf Queen of Shannara, which (I think) was like number seven in the series. I was just curious to see if there were any more books in that series, and I discovered that the whole thing had been wrapped up with book 35 in 2020. Say, what?! Thirty-five books? That's just insane to me. What kind of story takes 35 books to wrap up? What's even more crazy to me is that he actually finished it, and I guess he's starting a new series which actually looks interesting (I saw the cover art for his new "non-Shannara" book yesterday on io9).

I'm going to have to do some more research. Did these authors actually write all of these books or are they being ghost written by someone? With Feist, I can confirm that I think he's written all of his. The writing style never changes, as does the devotion of the characters. I suppose I could be fooled, but I don't think any second-hand writer could keep track of all the stuff that's going on in those books. I'm also glad that I waited until the series was over before I started reading them. It allows details to remain fresh and crisp in my memory so things he refers back to in his books were things I read maybe a month or two ago (instead of having years between stories).

In any event, I'm no less awed by the production of these writers. And these books are not thin flimsy things, but easily top 200,000 words a piece. Like...what the hell? People who are trying to get established as professional writers should take note: if you want to be a writer, you need to write your fingers off.

Is anyone else following some absurdly long series (absurdly in my book is more than ten)? I'd be interested to hear about them, even if I never get around to reading them.

Posted by Michael Offutt, Phantom Reader at 4:29 AM

Email ThisBlogThis!Share to TwitterShare to FacebookShare to Pinterest
Labels: book series, Good Writing, I'm in awe of the writers who finish a series that is so huge it staggers my mind to think about the length of it, prolific writers