There's one surprise that could be left in Game of Thrones and that would be making Jon Snow a benevolent Night King. 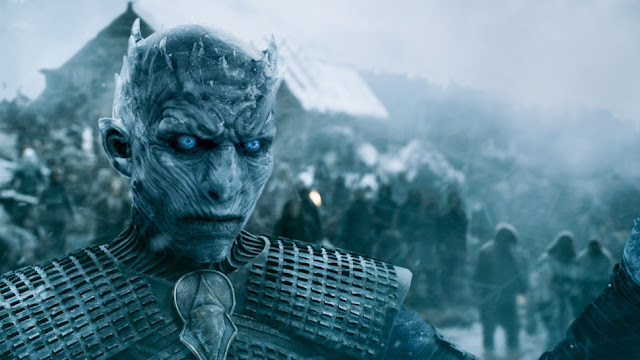 I want you to know that I didn't just "arrive" at this conclusion. I've thought about this for days, and I have evidence of foreshadowing that this "could" happen. I'm not sure as to exactly how it would go down though? I do know that Bran has seen how the first Night King was created, i.e., that a shard of Dragon Glass was thrust into his heart by the Children of the Forest.

So about that foreshadowing, which I thought was particularly heavy-handed within the confines of the script. First off there's Tormund who says to Jon before he leaves, "The North is in you, it's in your blood," or something very close to that as it may not be an exact quote. I've been thinking about that quote and wondering exactly what it means within the context of the show. Well, my conclusion is that Jon belongs North of the wall up there with his friends kinda like Uncle Benjen was doomed to stay up North.

Second, Ghost is in the North because "direwolves don't belong in the South." What kind of man abandons his dog/wolf? I know it sounds like I'm reaching, but I think that he and Ghost are going to be reunited. What better legend than the Night King and his faithful dire wolf wandering the wilderness of the North in the Lands of Always Winter?

Third, Sansa says, "Stark men get killed in the South." Well this seems like a lot of foreshadowing too. I think Jon Snow dies to become the Night King. I also think it foreshadows his eventual return to the Northern wilderness.

Fourth, the introduction of the last episode, "The Last of the Starks," didn't change. It showed the White Walker path going all the way up to Winterfell, which makes me think that maybe it's a hint that the "Night King may not be completely done."

Fifth, there are lots of moments where the Night King stares off with Jon Snow. It's like they are reflections of each other. Plus I don't think the Night King really had his heart in killing Jon Snow. I think he certainly could have chucked a spear at him or done some other thing countless times.

Sixth, Euron looks really surprised in the preview for this Sunday's episode. What could surprise him? A dead dragon with blue fire that is immune to their weapons, and a Night King on its back.

So now onto the "What is the motive for Jon Snow to become the Night King."

Second, I don't think that Daenerys can win this thing. The scorpion ballistas will not allow her living dragon to get close enough to King's Landing to make much of a difference, and I think we are going to see the Golden Company be super effective at decimating what's left of Daenerys's army. Dany is going to be on the brink of losing when Jon Snow becomes the Night King. He then raises all the dead on the field to fight and directs them to fight an Dany's behalf. He also raises Rhaegal (the dead dragon) which will probably be washed up on shore someplace at some point or maybe the harbor around Dragonstone isn't too deep. Jon as the Night King rides ice dragon Rhaegal, takes out Euron's entire fleet and then helps Dany to take the Iron Throne.

Then Jon bids farewell to Daenerys and returns to the North with his army of the dead. He's a Targaryen which means "Fire and Blood." He's the Night King, which means "Ice." So he is the Song of Ice and Fire.

A grateful and changed Daenerys becomes a benevolent queen to rule the seven kingdoms, and Drogon is the last of the living dragons.

Anyway, that's how I see it ending. I guess we'll see this week.
Posted by Michael Offutt, Phantom Reader at 12:17 AM

Email ThisBlogThis!Share to TwitterShare to FacebookShare to Pinterest
Labels: Game of Thrones, There's one surprise that could be left in Game of Thrones and that would be making Jon Snow a benevolent Night King