Everyone in the seven kingdoms is suddenly a mastermind except Dany's crew who are all morons now. 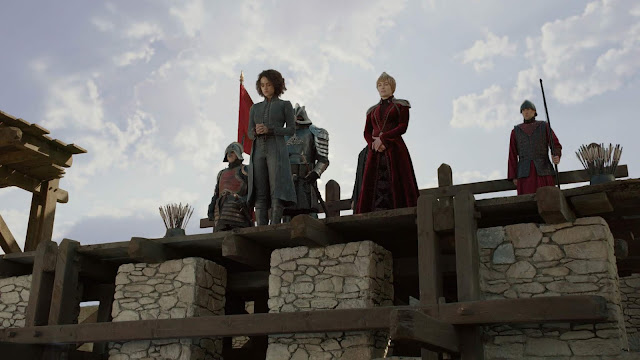 Sigh. Oh Game of Thrones, why must you end this way? I never thought I'd say this, but I'm really glad that this series is almost over. I'm invested to the end, and I think they've accomplished some great things in the epic fantasy genre. George R.R. Martin should pat himself on the back, because he's changed how everything works in entertainment from killing off beloved characters to inspiring others to follow his footsteps. However, my small criticisms of the show need to be aired out or my head will explode.

1) Why is it that Euron's fleet can just appear out of nowhere and apparently surprise anyone, even those flying in the air?

2) Why does it never occur to Daenerys to fly at Euron's ships from behind?

3) How did half the people in the north apparently survive the Battle of Winterfell?

4) Those balistas are super effective. Are balista bolts really that effective as medieval weaponry?

5) All the people went into the ocean and Missandei gets plucked out by Euron's forces? Of course she does.

6) Why is Bran not helping Daenerys by supplying her with sorely need information?

7) Sansa is terrible at keeping secrets, because...of course she is.

8) I'm still upset that the Night King is just gone. It feels like as if Harry Potter had killed Voldemort in the sixth book, and the seventh book was all about trying to take down Dolores Umbrage.

Anyway, criticisms aside, the third to the last episode ended up being pretty good. I'm kind of wondering what Jaime Lannister thinks he can do in King's Landing other than get killed by Cersei. And I'm kind of wondering why Cersei didn't just kill Tyrion. She had her chance. She paid Bronn to do it, but it was right there. What was stopping her? Maybe Jaime thinks he can kill Cersei, but I'm betting Arya gets her because she needs another name to cross off the list. I just hope it doesn't happen like it did with the Night King. In other words, Cersei is just about to triumph when Arya appears like a deus ex machina and kills her out of the blue. I don't think I'd be satisfied with that.

I guess we only have two more episodes to wait in order to find out. From here, writing this blog post, it feels like a long wait.
Posted by Michael Offutt, Phantom Reader at 12:09 AM

Email ThisBlogThis!Share to TwitterShare to FacebookShare to Pinterest
Labels: Everyone in the seven kingdoms is suddenly a mastermind except Dany's crew who are all morons now, Game of Thrones