Game of Thrones at its end was just the old bait and switch again. 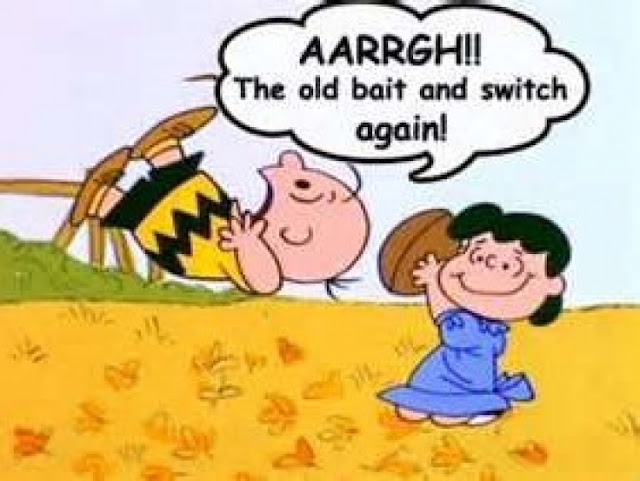 What a con-job...the ultimate bait and switch. Why would anyone spend so much time creating fantastical backgrounds for characters (clearly designed to bait people into this narrative) only to have them go nowhere and be nothing? Who writes a story of Anastasia Romanov only to have her end up flipping burgers in a McDonalds in Kentucky and that's the end? This is what I don't get about people who are defending Game of Thrones. You all got conned! We got conned! Because make no mistake, this is exactly what happened. You were promised a seven course meal with all the trimmings, filet mignon, salmon, pies and cakes...and the list goes on and on. You (no, WE) were teased and tantalized for eight years! And then we got a frozen dinner from Stouffers. Why is anyone happy with this ending? Are you stupid? Are you used to being treated badly?

Amazing Writer Person or AWP walks up to me (who is incredibly busy because life as a single person is hard) and begins to talk.

AWP: "Heyyyy...what's up my homie? Would you like to hear a story? It's suuuper good yo! Seriously."

Me: (Busy with about ten tasks that need to be done simultaneously)... "Eh?" I pause, thinking about that old mantra...don't let life pass you by; take time out to smell the roses. "Okay," I say. "I'm always up for a good story. Here take some of my money and now tell it to me."

AWP: "Thanks for the cash, broseff. Now I gots this story of a woman. She's from an ancient family that fled from an ancient civilization that fell to its doom when the ground upheaved underneath them in cataclysmic quakes. Beaten down, raped, and having lost everything including all the family she has left in the world, this woman walks into a frickin' bonfire with three rocks...and she comes out with three dragons! These dragons grow and become fierce just like she does. This woman conquers her naysayers and defeats all the wrongdoers of the world! She learns multiple languages, defies assassins, and is a leader whom everyone looks up to!"

AWP: (Cleans fingernails idly). "Oh that's it. She ded. Her boyfriend stabbed her in the heart, and well...she ded. Domestic violence is poison, yo!"

Me: "What the f*ck? That's it? What about all that stuff you told me about her?"

AWP: "None of it mattered. But hey I gots another story for you? Gimme some more money and time and I'll tell it. It's better than that dragon lady."

AWP: (Clears throat). "There's this guy who's a bastard. His father, see, dallied with a woman while he was at war, and as a result he was born out of wedlock. But in secret, he's actually the heir to a throne of seven kingdoms. All that stuff was a lie made up to protect him."

Me: (Clearly interested). "You're saying he's an actual king?"

AWP: "Damn straight, homie. And this guy goes north of this 800 foot wall that stretches from one shore to another on a continent with his dire wolf companion named Ghost! While there, they come across all kinds of evil undead and he actually faces off against a King Ice Zombie with the powers of a god and who rides a frickin Ice dragon! That ice dragon is so frickin powerful, it destroys that wall, and it all caves into the ocean! I mean damn! And he gets murdered by his own men and resurrected by a God so he can come back and save all of mankind like Jesus!"

Me: (Mind blown with the imagery). "This story is incredible! What happens to that guy?"

AWP: "Oh that's it. This guy just lives in a shack in the north now with his dog and drinks beer."

Me: "What the hell? That ending sucks. Why are you doing this?"

AWP. "Wwhhhat? You don't like my stories? You know...just because you go to Harvard and your last name is Kennedy, DOESN'T mean that you are going to be a senator or a judge! You can be a janitor and peak with a job at Taco Bell. That's what my story is about, you know! The extraordinary in all the ordinary!" Amazing Writer Person scoops up my money, having already taken all of my time, and says a parting, "F*ck you very much," and now he leaves.

Me: "But here's the thing!" I shout out loud. "I DON'T WANT TO LISTEN TO A STORY WHERE A MAN OR WOMAN WHO WENT TO HARVARD AND WHOSE LAST NAME IS ROCKEFELLER REACHES PEAK CAREER AT TACO BELL!!!!"

And that pretty much sums up how I feel about Game of Thrones now. All 73 episodes of it. What a dumpster fire and a disappointment. Endings matter, people.

After watching season 8, I feel like I got conned by a grifter. It’s like how I imagine really bad phone sex must be where someone gets you all worked up and then all of the sudden you get a dial tone or a busy signal. Somehow, you manage to reconnect with the person and you ask them, “Did we just get disconnected?” and they reply, “Oh no...that was the end. That was the finale. I hope you liked it.” I mean...what the hell? Who does this?

It just makes me angry. It’s like I was teased this fabulous dinner and told to invite all my friends over and then the person that teased me showed up with frozen burritos, tossed them on the porch, and drove off shouting, “Bye, Felicia,” out the window never to be seen again.

I hope Bennioff and Weiss and anyone else responsible for this ending (Martin maybe?) gets teased with a fabulous vacation and when they go to actually do the vacation, it ends up a huge disappointment with them staying in a Motel 6. "Yes, sir," I hear the customer service person saying to a complaining D&D (David Bennioff and D.B. Weiss). "The pictures in the brochure DO NOT match the actual product. You should be familiar with that little trick. It's called bait and switch. Bye, Felicia."

Here's a clip from In Living Color, which explains by example everything I'm talking about. Start the video at the 3:00 mark (which it should automatically do).
Posted by Michael Offutt, Phantom Reader at 12:07 AM

Email ThisBlogThis!Share to TwitterShare to FacebookShare to Pinterest
Labels: Bad Writing, Game of Thrones, Game of Thrones at its end was just the old bait and switch again