It shouldn't be a curse to grow old in America. 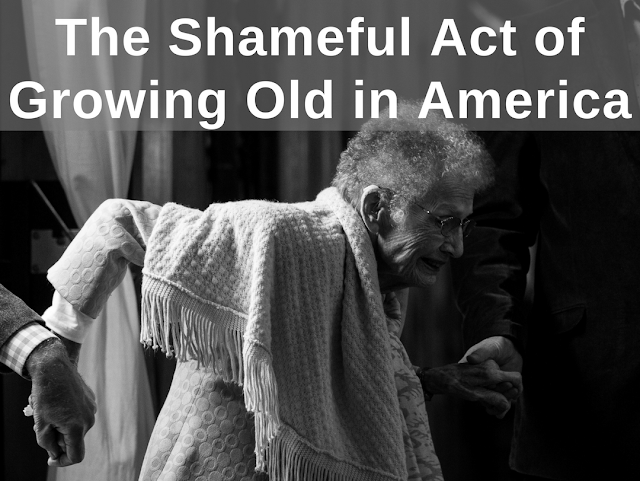 Psychology Today's online blog had an interesting article they posted on Tuesday, August 21, 2018. It was called, "Challenging Youth Culture: The Problem of the Puer Aeternus (eternal youth)," and you can read the whole thing HERE. It's part of a continuing series of articles that are examining "Failure to Launch," which is a phenomenon that is seeing people ages 21-34 (mostly male) still living at home well into adulthood. The article does acknowledge that there are economic factors at play that have impacted an entire generation's ability to move into full adulthood. However, it argues that this is a small part of a bigger movement that started in the 1960's counter-culture that's had a lasting effect on American society.

One such factor has been the emphasis on youth, with the ages between 18 and 25 being viewed favorably as the peak of a person's life and then the rest is just one long decline.

Another, is the unwillingness to commit in order to keep all options open. People are avoiding committed relationships, career preparation, and schooling all because they want to have as many possibilities in life as they can. Only these things I mentioned are ones that teach the value of day-to-day effort and perseverance...skills a lot of people nowadays do not seem to have. The biggest travesty that I have witnessed with my own eyes comes from people who are hitting 40 and their mid-40's and suddenly experience anxiety and depression because they spent their entire youth partying, doing drugs, having multiple partners/falling in love, and engaging in thousands of sexcapades. In order to make time for all of this, what suffered was working on their education or their careers--what I call "the boring stuff."  They realize in less than a decade that they can qualify for AARP membership, and yet they still work at McDonald's or Pizza Hut. However, some of their friends who didn't make these choices are now in successful careers, and the jealousy and fear start to set in.

A third factor has been adults eschewing the role of mentor and authority figure for one where they are friends and buddies with their children, with their students, and with their employees. Mentoring has been pushed to the back-burner and is rarely celebrated if ever, while friendships, and activities with friends are posted all over Facebook and Instagram. It's one way someone can become "internet famous."

The article finally concludes with a simple sentence: "The cult of youth has become toxic and is impacting on our society as a whole." Would you agree with this statement, given all the things written above? I know that I agree with it, I'm just not sure there's a ready fix for all the "Peter Pans" that I'm surrounded by on a continuous basis.

And regarding "Peter Pan's"...it's also weird.

It's a strange thing to be told by a 42-year-old man that he cannot watch Deadpool because he's not supposed to watch R-rated movies. It's another strange thing to watch a 38-year-old man seize his steering wheel in the Chuck-A-Rama parking lot like a child driving a bumper car, and move slowly around behind a group of friends making like he's going to run them down (all because it seems funny). It's a funny thing to see middle-aged (35) year-old men wearing skin tight jeans with holes ripped in them, and shirts covered in words and pictures of skeletons in cool poses that are tight enough you can see their nipples and belly buttons. Or if I'm going to turn the table and pick on women, middle-aged women wearing tube tops and/or tank tops. It's weird and strange and seems odd. So yeah...I think there's a problem. Especially when people literally bankrupt themselves for plastic surgery bills in order to stay young-looking (and this doesn't always work out very well). Surgery is traumatic people. It's okay to have wrinkles and gray hair. The only caveat is that Americans don't like to have sex with old people (so yes, there is that). But they'll "friend" you, which (I admit) is not enough for most people. So yeah, unfortunately embracing your natural aging process is (for most of us) also learning to accept that sexual options are drying up. It's a sad sad thing I guess. Not for me, per se, but I've always been a bit different.

Honestly, I can say with great clarity that I've never been happier in my life. Each new year is consistently better than the last. But I also never found a partner to journey through life with, so maybe there's a lesson to be had here: Mike didn't "play the game of youth" and decided to grow up so Mike must be okay with being alone. Maybe that's true, but even knowing the truth doesn't make me regret the fact that I'm headed for old age someday and looking forward to it, whether or not there's someone there to talk to. But it does make me feel sorry for others out there who made the same choice and aren't quite as adapt at being an adult who lives alone. It shouldn't be a curse to be a grown adult in our society. It shouldn't be a curse to grow old in America.
Posted by Michael Offutt, Phantom Reader at 12:07 AM

Email ThisBlogThis!Share to TwitterShare to FacebookShare to Pinterest
Labels: It shouldn't be a curse to grow old in America, Peter Pan