Tad Williams' excellent trilogy that began with The Dragonbone Chair did more than just influence Martin and other fantasy genre writers for decades. 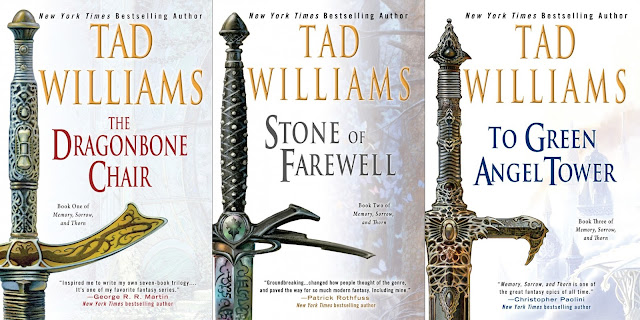 I have steadily been making my way through the 1000+ page final book in Tad Williams trilogy called Memory, Sorrow, and Thorn. The title of the book is To Green Angel Tower, and I'm about 850 pages into this monstrosity and getting pretty excited that the ending is within sight. I've enjoyed reading these books, but there's a sense of accomplishment too in closing this particular long-winded tale.

Because of the size of this trilogy (the other two books clock in at a mere 600 pages of written text) there have been typos. As I read over them I thought to myself, I used to get upset at this kind of thing. But given the sheer size of novels of this type, I now declare that it is an impossible task to find each duplicated word and incorrect spelling. Or for that matter, each omitted word that would make the sentence in which it appears sense. No editor, nor even a team of editors, is capable of catching all of those mistakes, even those who work for a "big house publisher." I suppose that change in my thinking is a result of me working with editors and doing editing myself. There's a reason why authors should pay attention to their word count. Anything that soars beyond 120,000 words is going to be too big of a job to handle and To Green Angel Tower (according to the internet) is 520,000 words. That just blows my mind as I type it. All of those words held between one cover.

Anyway, there are a few takeaways that I thought I'd share about Memory, Sorrow, and Thorn. I was drawn to these books because George R.R. Martin was heavily influenced by them, and I can see that influence all over the place. Even if you've only watched the television show, read the following and tell me if you note any similarities:

1) There's an ancient race of immortal beings that live far to the north. They are called The Norns, and they are pure evil. They use magic to turn living men into monsters under their complete control...kind of like zombies...and when the Norns arrive they bring the winter with them. Huge, cold storms that freeze weapons in sheaths and blind the eyes of defenders with snow in blizzards that are intense and frightening.

2) The Norns are led by the Storm King, Ineluki, a being that is undead and who has the ability to mess with anyone who can use this thing called "The Dream Road" very similar to how Bran's ability works in Game of Thrones. And what Ineluki does to you on The Dream Road has very real implications in the real world. Additionally, the Dream Road allows those who travel it to visit and see any points in the past as if they were bearing witness to them as they actually happened.

3) There is a girl with dark hair who is the daughter of the king, and her name is "Miriamelle" but it is abbreviated "Marya." She is a cunning fighter type character who continuously makes poor choices that impact her quality of life, but she ends up being all the stronger for it.

4) There is a small character called Binabik and he's a race called Quanuc. Many times, he's likened to a child or even a dwarf. He also talks exactly like Tyrion Lannister does in Game of Thrones. Here's one of his lines: "Winter is not being the time for naked swimming." And here's another, "If you wish to carry a hungry weasel in your pocket, it is your choice." Binabik's role in the story is to "know things" as he is an important member of this organization called "The League of the Scroll."

Now, to be clear, I'm not saying that George R.R. Martin copied Tad Williams. George R.R. Martin has written his own epic (if we don't just flat out admit that Martin has written himself into the weeds). However, he was correct to admit that he was heavily influenced by Tad Williams, and I think that's awesome because it's clear that George borrowed or expanded upon a lot of Mr. Williams' ideas (and I really do mean "a lot"). The only thing bad about any of this is that if one author does it, then there will be more that I haven't come across who will also be similarly tempted. For example, winter and evil have been inextricably linked by these two fantasy series, "Winter is coming" and all that. I think it's fair to say that no fantasy writer henceforth should ever make winter a source of evil, lest the whole "cold brings death" thing become hopelessly cliché, among other things :). And that's too bad, because there are countless writers out there who probably want to describe the approach of something evil as having a "chilling effect" on a protagonist. But you'd best not do it if you want to be original is all I'm saying.

And maybe the talk of cliché's in literature is utterly useless anyway. Any of us are only capable of reading "X" amount of books within our lifetimes. As long as we pick and choose ones that have original ideas to us, then who cares if they borrowed ideas from other books as long as we haven't read them? Maybe that's the point of it all, and a way to tailor the reading experience to a unique individual.
Posted by Michael Offutt, Phantom Reader at 12:25 AM

Email ThisBlogThis!Share to TwitterShare to FacebookShare to Pinterest
Labels: Tad Williams, Tad Williams' excellent trilogy that began with The Dragonbone Chair did more than just influence other fantasy genre writers for decades