The absurdity of megalodon as an actual creature makes me realize how wacky the universe we live in actually is. 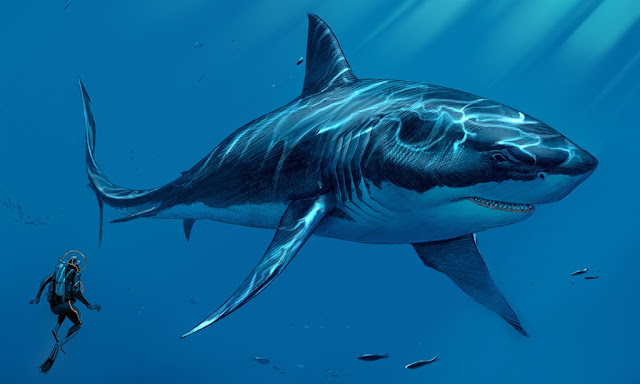 Looking back on "The Meg" which I saw in theaters a little over a week ago, I'm struck by how absurd the entire monster is. You can't help but find it absurd, as it swims along a beach packed with people bobbing in the water and just scoops them up like a fishing net. Down they go...right into its gullet. I am tempted to think, "wow...this is just absurd and oddly comical," and then I realize that an actual paleontologist weighed-in on "The Meg" and its accuracy. In short, he said it wasn't all that accurate, however, they definitely got the mouth right and it (megalodon) could have done just that.

So I guess the thought I have for today's blog is this: the megalodon was an absurd creature. It was absurdly large, too big to be real (even if it was real), and the fact that this thing once swam in the oceans of the earth is proof positive that nature has a sick sense of humor. Why was this gigantic meat tube with a mouth even a real thing? It had the largest bite force of anything that ever swam, flew, or crawled on the earth. It snapped full grown whales in half with its jaws. And the paleontologist in that interview I read said that a megaladon would have no problem biting a metal yacht in half. That's a ridiculous thing to even picture and it smacks of SyFy channel low-budget corniness. Only, it was real folks. Nothing corny about it.

The more I understand about our real universe, the more I'm kind of amazed at how science fiction and science fact are not always that far apart. Did you know that on Jupiter, the storms are so violent that they cause a chemical reaction that makes it rain diamonds? Who would ever have dreamed that up. On Titan (Saturn's moon) there are oceans of methane and it rains huge drops of methane into rivers that carve the surface the same as water does on earth. There are planets comprised of material that absorb nearly all visible light, thus making them black (like Geidi Prime in Dune) from space. And on earth, we had sharks so large that they could bite modern yachts in half with just their jaws and then keep swimming.

It makes me ask the question: why do so many of us spend time in virtual worlds looking for crazy stuff when reality is as strange as any fiction that we dream up?
Posted by Michael Offutt, Phantom Reader at 12:15 AM

Email ThisBlogThis!Share to TwitterShare to FacebookShare to Pinterest
Labels: The absurdity of megalodon as an actual creature makes me realize how wacky the universe we live in actually is