At this point in my life I'll watch Jason Statham versus anything. 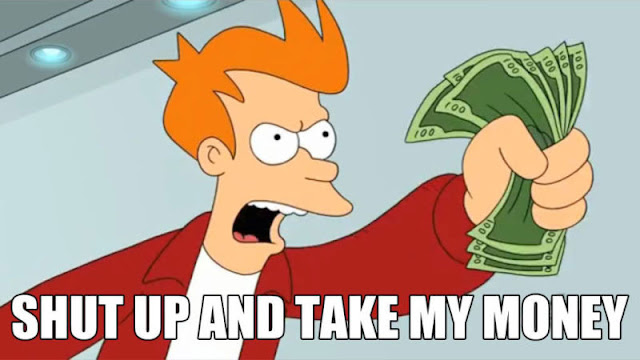 This is my reaction to Jason Statham being in The Meg, which "opens wide" this weekend.

I'd appreciate it if Dwayne Johnson and Jason Statham continued to spend downtime between F&F movies trying to one-up each other making SyFy movies with huge budgets. It's a billion dollar idea...at least admit this. And even though it would cost the studios a ton of dough, we (the public) would be the real winners of such a competition.

I'm so excited to see "The Meg" this Friday. I have a love/hate relationship with sharks not to mention an ongoing debate with my friend Brad as to whether the latest shark movie has a shark that's bigger than a school bus--the "school bus" standard being where the bar is set. Is it bigger than a school bus? Mmm...maybe? There's no doubt a lot of kids would fit inside that shark. That's how the conversation usually goes.

1) The Meg was a book published in 1997. So it's been a 21 year journey to realize as a movie. Those of you with stars in your eyes that want your stories to be realized in film, just think about this. Two decades. Yeah.

2)  This movie strikes me as having the same nods to the audience as Snakes on a Plane. It's ridiculous, but will be super fun anyway. It seems like a good movie to send summer out on a bang, kinda like Guardians of the Galaxy was a few years ago.

3) I wonder if the movie has multiple sharks in it. The book did. The premise is that megalodons were able to survive in the deep near volcanic vents where the water was warmer.

4) I hope Jason Statham punches the shark at some point.

5) I appreciate that the Chinese/International market is allowing movies to stray from the same five locations that they previously were restricted to.

6) I want a fishing boat collecting shark fins for "shark fin soup" to be eaten by megalodon. That'd be dramatic irony, and kind of funny.

7) I'm kind of excited to see the giant squid too (that's in the trailer).

8) I think there's a prologue in the book where a megalodon eats a T-Rex. This got me thinking that if they kept that, there should be a crossover with Jurassic World at some point. I'd be on board.

9) Take a look at this poster. I like it a lot. "There's always a bigger fish." Qui-Gonn Jinn from The Phantom Menace

Email ThisBlogThis!Share to TwitterShare to FacebookShare to Pinterest
Labels: At this point in my life I'll watch Jason Statham versus anything, The Meg