Money is only a portion of the high price we pay for Madagascar vanilla beans. 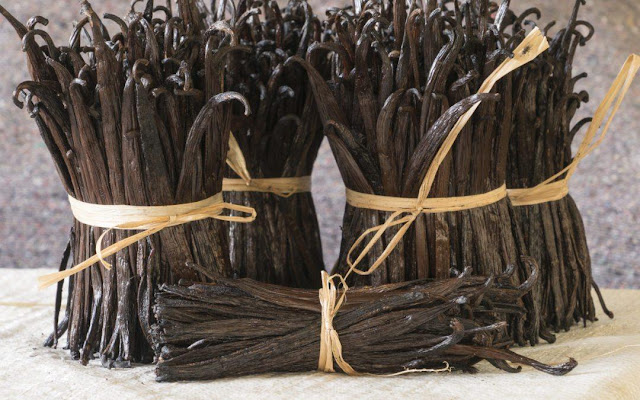 I recently purchased a half pound of vanilla beans from Vanilla Saffron Imports. They arrived in a timely fashion, were packed neatly, and came with a helpful recipe to infuse vanilla flavoring in sugar by storing the cured beans there. Before I go on, you should probably know that vanilla is my favorite spice. It has always baffled me that people use "vanilla" to describe something non-descript or boring. Vanilla (the real stuff) is anything but, and it is definitely difficult to come by. If you are unaware of the price of vanilla, it's high because climate change is wreaking havoc across the world in areas where the prized plant is grown. And then yesterday, I read an article on The New York Times entitled "Precious as Silver, Vanilla Brings Cash and Crime to Madagascar." Of course, I had to read it.

It seems like anything that's good in this world (or meant to be enjoyed) comes with a side dish of evil. I've experienced this with the movies I love. For example, do I continue to love Pulp Fiction, knowing that it was paid for and distributed by Harvey Weinstein? Do I enjoy Woody Allen movies knowing that Woody Allen is a pedophile predator? How do I reconcile the things that I enjoy with the damage that is done in bringing them to market? It's a complicated question, and it makes me think that there is something profound in the old (cliché) saying, "Ignorance is bliss."

In the article written for The Times, the author states that growing western demand for the flavoring and a cyclone that ravaged crops last year on the island off the coast of southeast Africa have driven the price to $600 a kilogram or $270 a pound. In 2013, it was only $50 a kilogram (as a comparison). As a result, people are getting wealthy, but the vanilla trade is also creating crime waves. For example, thieves will attack and kill farmers for their vanilla pods. So, in order to stay safe, vigilante and militia groups armed with clubs and machetes are patrolling the vanilla plots at night. Just this April, one militia came across a vanilla thief carrying three pounds of pods. They beat him with sticks until he fell down and then they chopped him to pieces with their machetes. As the article reports, it was just one of dozens of similar vanilla murders that have happened in the last couple of years.

Vanilla mansions and gleaming SUV's ply the broken streets of Samabava, which is known as the vanilla capital. Of course, violent criminal networks are now heavily involved in the production and distribution of vanilla.

When I shared this information with my friends who are also fans of vanilla, I got mixed reactions. My friend Meg was happy that I shared and is still processing the information. My friend James said, "Good, I hope they kill more vanilla thieves." And then my friend Matt said, "Blood vanilla...wait...that makes it sound better." My friend Sasha laughed at Matt and said, "Delicious!" As you can see, no one really cares or if they do, they are too disconnected from that society for them to process effectively. Fair enough, because I am too.

In the end, I think I'll just go on buying my vanilla beans when I want them. I'll still continue to watch Pulp Fiction and maybe eating real vanilla bean ice cream while doing so. Maybe I'll sit under the glow of a lamp decorated with real ivory. My green thirsty lawn will continue to get watered, I'll go to work in my car that consumes fossil fuels, and I'll wear clothes made in sweatshops in Bangladesh. Perhaps I'll gift someone a watch decorated with African blood diamonds or buy beluga caviar off Amazon. If people and things suffer or die because of any of these things, then I guess that's on me, and it's up to me to feel guilty about it.

It all seems so awful, when you take a step back and see what it takes to live the way that we do in the United States. But I've got to confess that these worldwide problems are difficult for me to process, and I do feel kind of helpless in actually making the world a better place. My role in the world is just too small. So it's more of an acceptance really...an acceptance that evil is committed and people die so that I can enjoy the creature comforts of my life. It's acceptance that, were I to curtail my consumerism in any way, it wouldn't make a bit of difference, because no one else is doing so. It's difficult to believe that all of us in this country live under such privilege, whether or not we feel it on a daily basis.

So how do you deal with the guilt attached to being a consumer? I look forward to your comments.
Posted by Michael Offutt, Phantom Reader at 12:21 AM

Email ThisBlogThis!Share to TwitterShare to FacebookShare to Pinterest
Labels: Money is only a portion of the high price we pay for Madagascar vanilla beans, vanilla