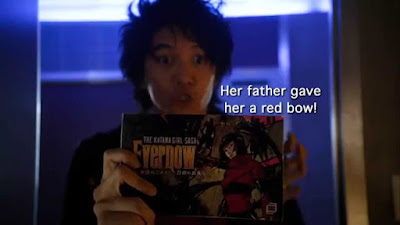 I watched Heroes Reborn last night, and I enjoyed it. But I also felt like there was a lot that I had missed. So doing a little research I discovered that NBC had a web series that leads up to the events in which the site at Odessa goes boom. Who knew?

If you followed the original series, Heroes, at all then you know that Claire Bennett is the cheerleader. It turns out that she broadcasted her powers to the world five years ago and inspired thousands of other evos (this world's "X-Men") to go public with their abilities. And just like in the X-Men storylines, they are discriminated against and blamed for basically everything that's bad in the world (like the terrorist attack in Odessa, Texas). As a side note, why doesn't anyone have a superpower that can clean up the smog above L.A.?

In the ensemble of characters we have Luke and Joanne Collins who are an interracial couple that hates all evolved humans and basically just wants to kill them all (subtle these two are not). There's Tommy who's a kid that can make objects disappear. There's Miko who stars as Katana Girl, and Carlos who's a masked vigilante picking up where his brother left off. The main character appears to be Noah Bennet from the original Heroes series.

Out of all the new "heroes" I rather liked Miko's origin story as I'd never come across it before. A gamer geek finished a very difficult video game called Evernow and got to an unexplored level wherein he "unlocked" the character of Katana Girl. The video game gave him a real address to go and check out. When he arrived at this hotel somewhere in Japan, he found a girl that was the spitting image of "Katana Girl" waiting for him in a room that matched the exact address. She seemed confused and at first booted him out of the room. Later though, she finds a katana in exactly the place that the gamer guy said she would find one and it transports her into a video game where she fights samurai standing in the way of rescuing her father (who is being held captive in a Tokyo skyscraper).

All in all, it was pretty cool, and I've got lots of questions about Katana Girl. For one, did she actually exist before the gamer guy unlocked her? That would be interesting if she didn't. Also, I'm not really sure what Miko's "superpower" happens to be. If it is that she can transport from the real world into a video game by drawing a sword then that seems really confusing. However, it's apparent that she can move from one place to another in the video game and her real life position seems to shift with that. So maybe her superpower is that she can hop into and out of "the matrix" (for lack of a better word).

One thing I can appreciate about a story with mutants is diversity done well (Asians, Hispanics, essentially everyone that Donald Trump hates). However, the whole mutants against regular people storyline has practically been done to death. I like how the X-Men movies are finally (after more than ten years of it) moving away from this kind of tale to fighting ultra-powerful villains like Apocalypse, and I kinda/sorta wish that other X-Men knockoffs (like Heroes) would take a cue from Marvel regarding this. The studio execs need some jerk-face editor cracking them over the knuckles and screaming, "That's cliche!" But it probably boils down to budget, right? You've got to have a storyline that only rarely calls for C.G.I. because doing all of the effects that make us "oooh and ahhh" are expensive.

Anyway, watching Heroes Reborn on Thursdays is easily going to fit in my lineup as I'm not a Grey's Anatomy/ How to Get Away With Murder watcher. Did any of you take the time to watch Heroes Reborn? If so, what did you think? It remains to be seen if this series can stack up to the awesomeness hinted at by CBS's Supergirl (which I'm most excited about). If you haven't checked out the trailer for Supergirl, you can do so by clicking "play" below. Have a great weekend, folks.
Posted by Michael Offutt, Phantom Reader at 1:12 AM

Email ThisBlogThis!Share to TwitterShare to FacebookShare to Pinterest
Labels: Heroes Reborn, Heroes Reborn seems like a solid sequel to the original series and Katana Girl is my favorite evo thus far