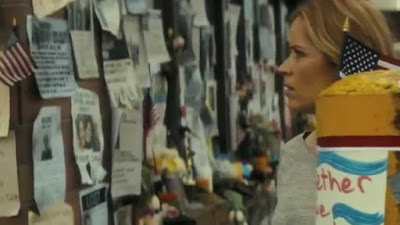 Rubén Blades who plays Daniel Salazar on AMC's Fear the Walking Dead, said something really interesting in last night's episode, entitled, "Not Fade Away." After Madison Clark's character returned from her afternoon adventure in which (to her horror) she found evidence that the military "protecting them" was killing innocent Americans, he told her of this story from when he was a boy. The military had come to his village in El Salvador, taken people away, and when he asked his father where they had taken them he was reassured that they would all come home again. He didn't think anything of it until he found them all in the river. His father told him, "Men don't do bad things because they are evil. They do evil out of fear." And then Mr. Salazar said, "My father was wrong. There's no difference between the two."

It's this that I wanted to talk about. At first I thought that Daniel meant there's no difference between evil and fear. However, that didn't make sense. Then another interpretation occurred to me: Daniel was saying that people who commit evil acts out of fear are exactly the same as those who commit evil acts just because, well...they're evil.

Within the framework of The Walking Dead world, I find this thought particularly troubling because what does it say about Rick Grimes? He's our protagonist from the series that launched Fear the Walking Dead, and we ended last season with him doing particularly evil actions out of fear. So really, Rick (who started the series as a hero and with a heart of gold) has made a transformation to being an anti-hero...to essentially being the villain. At least that's the conclusion I'm left with when I consider the wisdom of Daniel Salazar's words.