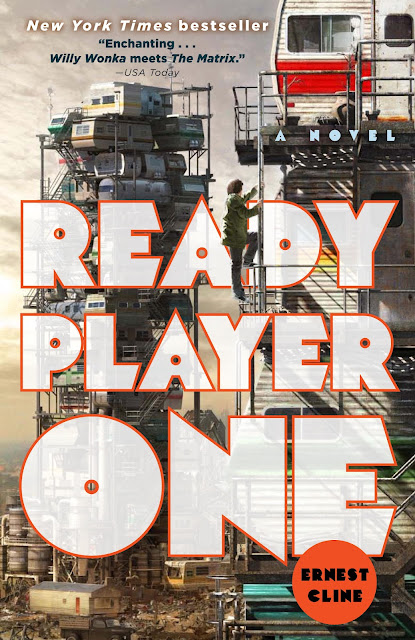 Ready Player One is Ernest Cline's first book. It's also a masterpiece. I can't tell you how many times I felt overwhelmed by nostalgia for small towns and the eighties...a time in my life that I now recognize as being simpler and easier. I guess there's something to the saying that none of us can never go home again. I wish that weren't true.

Ready Player One is a dystopian young adult novel, and it shares with other young adult novels the cliches of having dead parents. The soul of the plot, however, speaks to anyone that has ever played massive multi online roleplaying games (myself included). In the dystopia of Ready Player One, global climate change and the plundering of Earth's resources has made it so that there is tremendous income inequality everywhere, and the poor must live in trailer parks called "Stacks" that are as high as skyscrapers yet they are not fanciful buildings. Rather, they are trailers piled one on top of another via a metal grid that makes this possible. In Wade's trailer (he's the protagonist) there's at least a dozen people including a tattooed aunt with a druggie boyfriend that beats him up when he's drunk.

The rest of the world really isn't any better. The poor far outnumber the wealthy, and corporations enslave debtors to work for them in call centers as technical support specialists for Oasis (the huge online game that is at the center of Ernest Cline's story). The thing I loved about Ready Player One though was the fact that it took me back to my childhood. Halliday (the deceased creator of the Oasis) set it up so that his hundreds of billions of dollars would be inherited by whomever managed to find his hidden Easter egg. In order to do this, you had to find three keys. It sounds easy, but because of the expansiveness of the Oasis, no one had found it in five years. Not until Wade finally put things together and realized that an old Gary Gygax module from Advanced Dungeons & Dragons called "The Tomb of Horrors" was where he would find the first key. And following clues that were in front of him the entire time, he knew exactly where to look for the "Tomb of Horrors," and I gotta say, it's exactly how it appears in the module.

From there it's a trip through all the greatest things that made the 80's "the eighties" including games of Joust and Tempest and Pac-Man, being put into the movie War Games as Mathew Broderick's character, and even taking on the role of Arthur in Monty Python's Holy Grail. And in all of this fun, there is tremendous danger too because the corporation called IOI (which very much wants to take control of The Oasis so they can charge money for it) hunts down and murders all of Wade's family and some of Wade's friends. The CEO of IOI gives Wade a warning in that it's ridiculous to think that the stakes could be anything other than astronomically high because there are billions and billions of dollars to be lost. In other words, IOI will stop at nothing to find the Easter egg.

If you haven't read this book, I strongly urge you to do so. It's great storytelling, and I recently learned it's being turned into a film by Steven Spielberg. I can't wait to see it. And of the books I have read this year so far, this one is among the finest.
Posted by Michael Offutt, Phantom Reader at 12:58 AM