Recognizing the signs of a brain aneurysm 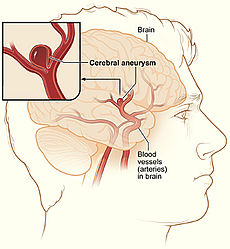 I have a friend named Joe that I haven't seen in years. We don't keep in touch anymore. He moved on, and so did I. But I remember the day Joe's dad died of a brain aneurysm. He had been working and reported that he suddenly felt a sharp pain in the back of his head. As if someone had struck him with a hammer. He made a phone call, got progressively worse within minutes of the event, and went unconscious soon after. He was dead in something like 25 minutes. It's that deadly, and that serious. Doctors reported that the vessel that burst near the back of his head caused blood to pool in the brain with such tremendous pressure, there was something like 400-pounds crushing his spinal column.

Well yesterday, I saw this happen to a woman with whom I work. It was morning, we were starting our meeting (it happens once a year and we had it at a local park), and this woman got up from her chair, staggered, and fell down next to a tree. I asked, "What's going on there?" And I was told she had a bad headache. Someone was looking in their purse for some Advil. I said, "headaches don't make people stagger like that. Where is it?" They said, "the back of her head." I said, "I think this is very serious." When I said that, the Manager in charge, dropped everything and acted upon it.

Someone went over, helped the lady to the car, and started driving her to the hospital. It got worse and worse and they called an ambulance. I found out later that day that she indeed had suffered a brain aneurysm. But because of swift thinking on everyone's part, and being in the heart of Salt Lake City where there are excellent medical facilities and some of the best neurosurgeons in the country, she has (I think) a good chance of beating this thing. At least I hope so.

My point in telling you this is not to scare you. But it is to tell you first-hand from someone that has now been around this thing twice, if you or someone you are watching complains of a sudden, severe headache that starts at the back of the head (like someone hit them with a hammer), and it's staggering, you need to drop everything RIGHT NOW. This is a life and death situation. Don't dismiss it. Don't go and grab some Advil or some Excedrin. And don't say, "this person must be faking this as a joke." You call 911 without hesitation.

Just as a disclaimer, I'm not a medical professional. I don't have medical training. But I know what I've seen, and I'm passing it on to you.
Posted by Michael Offutt, Phantom Reader at 12:20 AM

Email ThisBlogThis!Share to TwitterShare to FacebookShare to Pinterest
Labels: Recognizing the signs of a brain aneurysm