A little scene from Oculus

So, this Labor Day weekend, I sent off my completely finished sequel to Deron at Double Dragon, and he says he'll probably publish it about the same time my book was done last year (so spring of 2013). That's really cool. I have to say, this book took A LOT out of me. I've been fighting with it for over two years, had two extremely talented beta-readers go over it, had two editors go over it (and no Andrew, I'm sure there's a comma somewhere that's out of place, but I just don't care), and I went over it myself about a DOZEN times. You know, birthing a sequel is hard as sh*t. I don't know how some people seem to do it so easily.

Oculus is also bigger than Slipstream. It has more meat to it, and I introduce a wide variety of characters so that when I sink into the lowest levels of depravity (as I am prone to do), then I have lots of fictional people I can torture and make do deplorable things.

So for some reason, my "artistic" bug hit me this weekend. See, I used to fancy myself an artist, but I realized that I suck so I gave up on my dreams of doing it professionally years ago. But that doesn't stop me from dabbling with coloring pencil every now and then.

So I drew a scene from Oculus that stars Brianna (a mysterious Watcher character--yes that's a religious reference) and a more mature Jordan. The scene is provided for you as a reference to the picture that I drew:


They both picked up a radiation badge from the control room operator. Jordan knew him only as Harvey. Then she followed him into the room where she took a seat next to him in front of a bank of computer screens. Jordan waited for the go ahead and fired the synchrotron at a previously prepared ice sample and awaited the data.

“How do you prepare the samples?” she asked him.

“Dr. Wolfson had a bunch already completed,” he said. “But she did walk me through how to do it on my own. Basically, ice samples are decontaminated by three repeated washings in ultrapure water. The first step involves taking a sample from an ice core in cold storage and melting it at room temperature. Once that’s done, you gently agitate it for homogenization and then partition it into individual vials of polystyrene Coulter accuvettes, which have all been pre-cleaned using the ultrapure water I mentioned. Dr. Wolfson told me repeated checks showed the dust concentration difference between the first and the last aliquots is typically around the level of measurement-reproducibility. That is, the aliquots provided for the different analyses should be comparable.”

He paused, watching the screen, gaze flicking from one monitor to the next. “All right, there’s the fluoroscopic data we’ve been waiting for.” He gestured with his hand. “We are looking at the insoluble elemental composition of Antarctic dust, which appears to be composed of more aluminum, less silicon, and less potassium than the previous sample that I took from a different depth. The result suggests that either the characteristics of the dust source changed at some point in history, which could mean factors as simple as soil development, or that there was a change in the relative contributions of the overall varying sources.”

“Meaning that there was an environmental change.”

He nodded in agreement. “Exactly—it’s like a portrait of earth’s history captured in time—in a single drop of water.”

“How do you know all of this without looking it up or cross-referencing the fluoroscopic data with a chart?” Brianna asked.

He glanced at her. “Well, I memorized it before I met with Dr. Wolfson so that I’d have a better chance at getting the job. The data on known fluoroscopic rates is on the university website.”

“You memorized all of the numbers?”

“All right, what’s this?” She pointed at a number on the screen.

“That,” Jordan said, looking at it, “is the numerical figure associated with the element neodymium. How did I miss that?” He scribbled down the details of the water sample on a notebook.

“Why is that significant?”

Her eyes narrowed. “You’re lying to me.” “Honest, I’m not. I-I mean the finding is significant because none of the previous samples that I’ve examined showed even the slightest traces of Nd in them, but it’s in such microscopic amounts that it’s difficult to say how it got in the ice.” 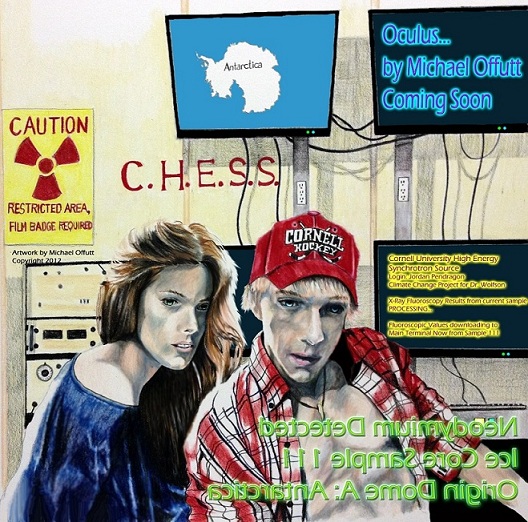 I did the picture using coloring pencil and finished it in Adobe Photoshop. Basically, imagine yourself looking out at them through a computer screen (the words are printed on in front of Jordan). I aged him some from my other pic I did of him because he's now a college student. Brianna is a junior so I wanted her to look a little older. They say: "Neodymium Detected, Ice Core Sample 111, Origin Dome A: Antarctica.

Features I put in the picture:
1) Antarctica, because that's becoming increasingly important to the story.
2) The name of the particle collider, "C.H.E.S.S." is on the wall.
3) Jordan's red "Cornell Hockey" hat is a powerful symbol in the book, and he wears it everywhere. He plays hockey on the University team. Plus, I thought Jordan looks good in red so I put him in a red checkerboard shirt. Also red (blood) is another powerful symbol. Green was more important in the first book.

Anyway, sorry for the long post. If you like my drawing, you can Pin it or whatever. There's no fear of copyright since I own it, and I say you can use it. Have a great Tuesday.
Posted by Michael Offutt, Phantom Reader at 1:02 AM