Last year at about this time, AMC put up some webisodes to usher in Season 2 of "The Walking Dead." The six part mini episodes done in the flavor of the six webisodes AMC did for "Breaking Bad" (if you haven't seen them, watch them because Twaught Hammer is hilarious) revealed the origin story of "Bicycle Girl."

So i started thinking, what could they do for webisodes this time around? Will there be a six mini-episode that has an answer for this burning question: 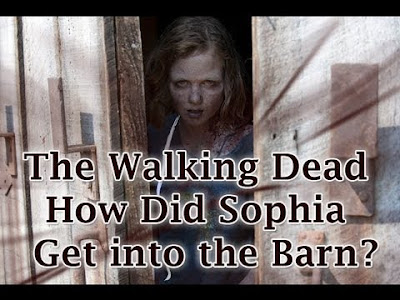 My vote is to explore what happened with Sophia in season two. Show us how she became a zombie and follow that through to when Otis captured her and stuck her in the barn with all the other zombies. As a caveat, I kinda/sorta know what happened, but I just want to see it for myself. Especially since this DIDN'T happen in the comic books, and it was a huge and very sad reveal last year.
The Walking Dead season 3 episodes (whatever they may be) are slated to debut on October 1st. And then, we get the return of The Walking Dead on October 14th. For your viewing pleasure, I give you "Twaught Hammer." If you are fans of Jesse Pinkman (Aaron Paul) you'll love this.

Have a great Tuesday. Tomorrow, I'm participating in The Big Smoke cover reveal!
Posted by Michael Offutt, Phantom Reader at 12:12 AM