Distraction from J.L. Campbell - The Friendship is Forever Tour 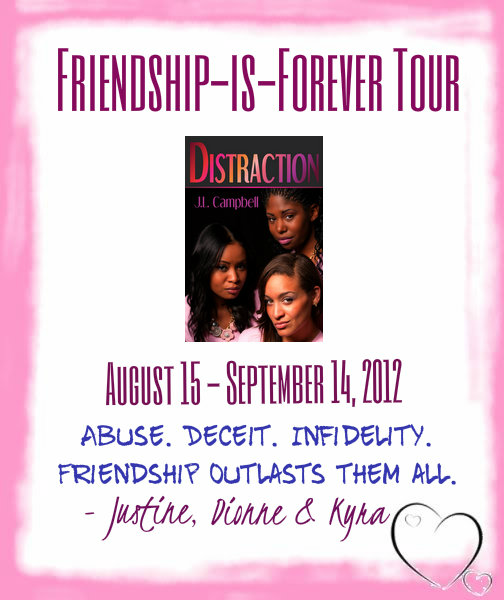 First off, know that Distraction is FREE on Amazon right now. :)))) Get your kindles and download! If you don't mind, please tweet about this so that Joy can get maximum exposure for her free book and hopefully climb the rankings.

Please welcome author J.L. Campbell who has written a wonderfully enticing book called Distraction.  I've been reading this book over the last couple of weeks, and it's a real page turner thus far (at least a four star book if not a five star). Campbell has an expressive sensuousness to her writing that leaps off the page. Each chapter begins with a Jamaican proverb, which she graciously translates for the reader who would most likely be unable to understand the meaning.  And each proverb does come into play in the chapter's content.  Distraction isn't filled with the most likeable characters, but they feel like real people.  In Distraction, Justine is hopelessly in love with Xavier (a real hunk). Only there's one hitch, she's married and so is he. And therein lies the tension. I will part by dropping these lines written by Ms. Campbell:


"He made love to her again, smothering her beneath him, holding her climax at bay. He meant to frustrate and punish her, and when she lay exhausted, he wouldn't meet her eyes."

Good stuff, don't you think? Oh and did I mention that every chapter begins with palm trees in silhouette? Gotta love palm trees. Ah Jamaica. Take it away J.L. Campbell.

As with anywhere in the world, island living has its peculiarities. Many things have changed in the past twenty years in Jamaica. We’ve seen the development of a network of highways, our public transportation system has been upgraded, and most buses now have air-conditioning. Many homes have cable television and at least half of us have two cellular phones, owing to high cross-network charges.

Despite the passage of time and changes, at heart Jamaicans are conservative. I see this in the public outrage over things that aren’t considered the norm, and I also know there are many narrow-minded people in the world. 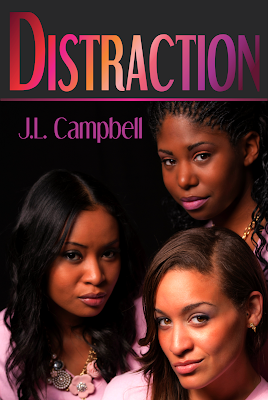 While I was writing Distraction, I had many stirrings of doubt over whether I should finish the story. I posted chapters as I wrote them on my writing network, and there were people reading along who were outraged by the behaviour of the women. I knew I’d probably get this reaction from other readers. However, I’ve found that writers are more open to scenarios outside of what the average person considers normal and many understand need, motive and resulting choices. To date, I haven’t seen more than a single one-star review on Amazon, but I’ve conditioned my mind to the fact that more will come.

I’d like to invite you to download a complimentary copy of A Baker’s Dozen: Thirteen Steps to Distraction. In this prequel, you’ll meet Dionne, Kyra and Justine a year before Distraction takes place (and before they start doing the forbidden).

The actual novel Distraction will be free to download from Amazon today through September 3rd! How cool is that?

Leave a comment on this post and you’ll be entered to win an e-copy of Distraction. At the end of this Friendship tour, there’ll be a main prize of a Distraction note pad & pen and a $10 Amazon gift card. The second prize is a paperback copy of Distraction. Sign up for that at the Rafflecopter here. 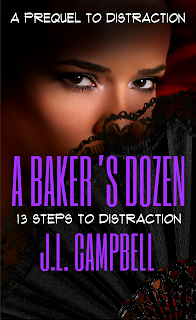 I appreciate you taking the time to read.

Michael, thanks so much for hosting me.

J.L. Campbell is a proud Jamaican and the author of Contraband, Distraction, Dissolution, Don’t Get Mad…Get Even, Giving up the Dream and Hardware (pen name Jayda McTyson). Campbell is always on the lookout for story making material, loves company and can usually be found lollygagging on her blog at http://thecharacterdepot. blogspot.com
Posted by Michael Offutt, Phantom Reader at 12:04 AM