Bill Finger and the Batman 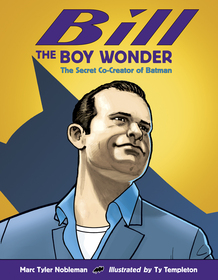 As a boy, I collected Detective Comics for years. You would see me flipping through back issues in obscure comic book shops in every city I visited.  Nearly every great writer in the industry has done some work on this superhero.  The Batman's entire mythos has been penned by such notable names as Marv Wolfman, Samm Hamm, Grant Morrison, Alan Moore, or Frank Miller. They invented "the Rogue's Gallery" which seemed to take on a life of its own as more and more villains joined that infamous group. We have Ra's al Ghul, the League of Shadows, the Joker, the Riddler, the Penguin, Catwoman, the Scarecrow, Bane, Harley Quinn, Poison Ivy, Mr. Freeze, and the list goes on and on.

Truthfully, I've forgotten the names of so many good comic writers, but I still remember my favorite story lines. Who can forget "A Death in the Family"?  Who can forget the blood streaked corpse of bad boy Jason Todd (Robin) which basically started all of this "Dark Knight" stuff. After Jason's death, the Batman was never the same. He became brooding, blamed himself, and embraced a life of dark isolation. Who can forget the iconic "The Killing Joke" where Barbara Gordon "Batgirl" gets paralyzed? This character is later scene in the television series "Birds of Prey" which lasted only one season (but deserved more).

One of the darkest graphic novels I have ever read is "Arkham Asylum." Its art is flat out, unforgettable. And I unknowingly attributed ALL of this great creation to Bob Kane who I thought created "The Batman." But recently, I realized that I am wrong. DC has hidden a substantial truth from the eyes of the world. Bob Kane had a friend and co-worker named Bill Finger who is responsible for half of everything that IS the Batman legend. I wanted to talk about that today, because I think no recognition for something as big as "the Batman" is wrong.

As the story goes, DC commissioned Bob Kane to come up with a new superhero after their success with Superman. Kane met Finger at a party and hired him to help.

These are Bill Finger's contributions to the Batman legend as identified in the new book Bill the Boy Wonder: the Secret Co-Creator of Batman by Marc Tyler Nobleman:
Kane went on to become very wealthy. Bill Finger died poor because his name is on none of this. Does that seem right to you?

Here's a great fan-made video called Batman: Puppet Master. Why am I including this? Well 1) it's great entertainment but 2) it shows you just how ingrained the whole "Batman" experience is with American pop culture. It's filmed in the spirit of Christopher Nolan's Dark Knight franchise. I think it's pretty good, but rather long. Give it a watch if you have the time. And the next time you talk about the Batman, know that there is a silent co-creator of this superhero that got absolutely no credit and hardly any money.

What would you do if someone took all of your ideas, got rich from it, and gave you no credit at all?
Posted by Michael Offutt, Phantom Reader at 12:07 AM