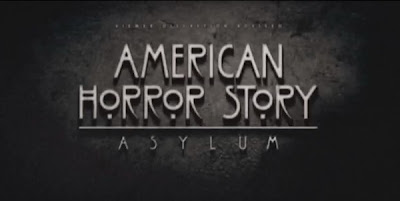 In my opinion, the first season of American Horror Story broke new ground in a tired genre of cliche stereotypes. I was held spellbound by the tale of a family that had moved into a haunted house. I told myself, there's no way you can kill off main characters in the first season. Yet that's exactly what they did. They killed off the entire family by the finale and wow, was it ever epic.

Season two is an entirely different story, set in an asylum. Some of the same actors and actresses are returning, only they are cast in different roles. Season one and season two are unrelated.

This approach is absolutely brilliant. And because the writing was so good in the first season, I will be right there for the premiere in October with my popcorn and DVR ready.

Anyway, here is the first Asylum teaser trailer that got released last week. This is the perfect example of a great hook only in video form and not written down.
In this short clip, here are the elements that we get. 1) We hear a ringing bell. That could be a church service in the background or a call to prayer or just the time of day. But it's kind of creepy. 2) There's a nun in a habit walking away from the camera carrying two buckets.  What's in the buckets? Body parts.  We hear birds chirping which might mean that this is meant to be food for the local animals. 3) The nun is not panicked in any way. It's obviously a duty that she does often.

Holy crap! I'm hooked. I've got to know more. What's going on here? Are nuns feeding people to the local animals? Why are the human bodies all chopped up? Who put the body parts in the buckets? Do we actually see the bodies getting chopped up? Are they gonna go there? AHS is dripping in blood and gore so, maybe. They showed kids getting blown away last year in a Columbine type massacre and women getting horrific abortions that resulted in their deaths. So many questions, so few answers.

Tomorrow I will be participating in Ciara Knight's takeover of the blogosphere with "Weighted." Have a great Monday.

EDIT: I was mistaken on the interview posting date. I will be featured on Brinda's blog next Monday.
Posted by Michael Offutt, Phantom Reader at 12:03 AM