Hollywood may be screwing up Neuromancer 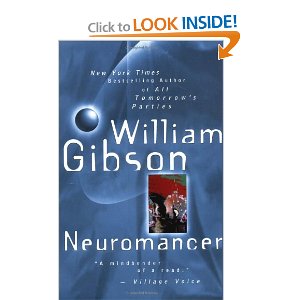 The first time I read the opening line of Neuromancer, I was hooked.

"The sky above the port was the color of television, tuned to a dead channel." That line is all we need to know about the atmosphere of the novel that would come to spawn an entire genre on its own: Cyberpunk. With just a few years we had RPG's called "Shadow Run" and "Vampire: the Masquerade" seeking to copy some or all of the flavor you would get in just one reading of Neuromancer.

Well, at long last, it seems that Hollywood is getting closer to making a Neuromancer movie. I first read Neuromancer in 1990. By then it was known everywhere as the breakout novel from a new voice that seized the most prestigious awards in science fiction, The Phillip K. Dick Award, The Hugo, and The Nebula. Yowsa.
I had never read anything like it. With Chiba city, a modern reinterpretation of the Yakuza, and street samurai, Gibson created an unforgettable atmosphere. But I just looked at the concept art done by artist Amro Attia for the movie that got posted on io9, and it's underwhelming. It looks like the generic stuff that has appeared in every cyberpunk RPG for twenty years. It had nothing new to it. Mr. Attia if you are reading my words (very unlikely), I'm not trying to insult your work as you draw very well. But seriously, these pics could have been cut and pasted from a Shadowrun fansite. Neuromancer DESERVES more.
Additionally, I'm not particularly excited about the cast. Mark Wahlberg has been offered the part of Case, and I really don't like Mark Wahlberg. There's no role he has ever been in that has made me want to see one of his movies.

I hope that when this movie gets made, it isn't awful like the Total Recall remake I saw this weekend. Oh how I wish I could get THAT 90 minutes of my life back.

Anyway, Hollywood may be screwing up Neuromancer and that doesn't make me happy.
Posted by Michael Offutt, Phantom Reader at 12:03 AM

Email ThisBlogThis!Share to TwitterShare to FacebookShare to Pinterest
Labels: Cyberpunk, Hollywood may be screwing up Neuromancer, Neuromancer, Shadowrun, William Gibson