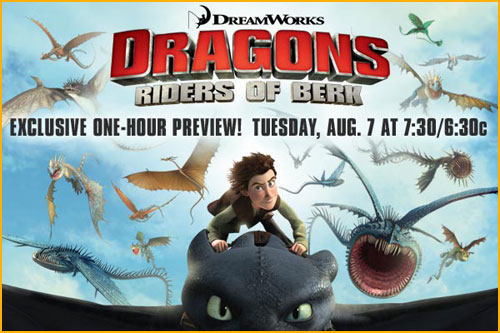 Did you watch the one-hour premiere last night of Dragons: Riders of Berk on the Cartoon Network? If not, here's the teaser for it (from io9).


This weekly animated series follows the continuing adventures of Hiccup and his dragon Toothless on the island of Berk, along with the band of dragon trainers, all of whom now have dragons of their own! Through their training, the kids are finding out the cool things dragons can do. Not only will they learn more about their dragons, they'll also discover new ones and battle against enemies as they explore worlds they never dreamed existed. In addition, the talented cast from the feature film - Jay Baruchel (Hiccup), America Ferrera (Astrid), Christopher Mitz-Plasse (Fishlegs) and T.J. Miller (Tuffnut) - will lend their voices to the series.

Cartoon Network is doing what Fox did with "Touch." That is, they are airing just this one episode, letting it percolate with the viewers for a while, and then launching into more episodes of the series this Fall.

So what did I think? Well how could you go wrong with an episode title like, "How to start your own Dragon Academy?" LOL All the voices are back. Astrid, Hiccup and crew start off with a flying competition and of course, Hiccup and Toothless steal the show. And dragons are still being dragons. Which in this show means they are "adorable" yet "destructive".

But you can't have a story without conflict. One concerned villager shows up with a fat sheep under one arm and complains about the dragons. Hiccup tells his dad, "I'm the best man to take care of the dragons." His dad responds, "You're not a man yet." And that kind of sets things up as a coming of age story. It's time for Hiccup to grow up and become the man he's supposed to be. And he's going to start by helping humans to coincide peacefully with the dragons.
At first it doesn't work so well, and all the teenagers are in danger of losing their beloved dragons. But one annoying villager lets drop the precious knowledge that a tiger never changes its stripes, and a dragon will never go against its nature. So Hiccup comes up with a plan to use the dragon's nature to aid the village, by terrifying fish into the fishing nets, by scaring wild boars out of the forest and into the slaughter houses of the villagers, and by raining dragon poop onto fields to fertilize them.

Overall, I really enjoyed the episode. The animation wasn't quite as good as in the movie but *almost there. I can't wait to catch more episodes later this year.
Posted by Michael Offutt, Phantom Reader at 12:04 AM

Email ThisBlogThis!Share to TwitterShare to FacebookShare to Pinterest
Labels: Cartoon Network, Dragons: Riders of Berk, How to start your own dragon academy, How to Train Your Dragon