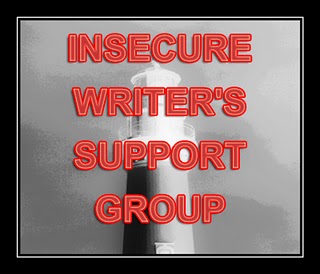 It is that time again.  If you haven't joined, you really should.  On the first Wednesday of every new month, the writers of the Insecure Writer's Support Group organized by super blogger Alex J. Cavanaugh step forward to give their testimony to the things that plague them most. These are doubts, fears, and terrors that lurk within the fragile mind of the author inside all of us that longs for a return to the days of J.D. Salinger and Harper Lee...when one could just put something into print and the publisher did all the work and the writer just collected checks and hid from view, never to be seen from again.

So what am I insecure about this time?  I'm going to answer this question with a question, so here it is.

Am I a good enough writer to be published?  Should I just have hidden my manuscript in a drawer and never let anyone ever see it?

The feeling that I get by putting myself out there is similar to the feeling I get while shopping for clothes.  It's like the plus-sized guy or gal that walks into an Abercrombie and Fitch store and sees all the advertisements on the wall of super-fit people enlarged 20 times.  These photos are all done in artistic black and white and airbrushed while enjoying an afternoon by some southern river with girlfriends and buddies in tow and wearing the latest fashions.  Lightning bugs and dew on the kudzu vines are optional but may help sell a pair of jeans.
I look nothing like them.

The black and white model photos package a dream pretty nicely. Well so does all the work that goes into a Big Six published book from cover art to massive editing done by a team of the best and hired by a firm with bottomless pockets. Throw in a P.R. department and well...that standard is the Abercrombie & Fitch of the publishing world.  Harper Teen is the Hollister, Random House is the Neiman Marcus.

So here I am with my mid-size publisher with a whole world of "models" and "airbrushed" faces out there and I'm eyeballing one small empty shelf in an infinite warehouse and putting my stuff on it and wondering if it even has a chance.

So that's my insecurity.  Self doubt.  Maybe that's why so many authors seek validation for their work.  We live in a world that subliminally insists that we suck on just about every level because someone, somewhere decided upon a standard by which to measure if something is "good or beautiful".  The trouble is...not all of us fit so easily into the pre-drilled holes that society has made for us. And when we fight those molds, things can get ugly pretty fast.

So what do I do to fight the self doubt? Well...I listen to Eminem. He's kinda my muse.  He doesn't inspire, doesn't give me story ideas, but he's damn good at keeping me going when all I want to do is quit.  I've followed his career for twelve years, from the old slim shady stuff to his now cosmic superstar status, and this guy absolutely fascinates me. I own a bunch of his albums and listen to them in secret because most of my friends cannot understand why on earth I like his extremely powerful words.  Yeah he spouts a lot of hate.  But, I think it fits me because I have a lot of repressed anger.  I think he's a musical genius on the same level as Mozart or Beethoven...just born in a different era.  Anyway...here's his latest song with Bruno Mars (who has the voice of an angel by the way) that I listen to quite often and I have to say...yeah...I love it.  I even included it in my latest book because this is precisely the kind of music that Jordan would listen to (because he has a lot of repressed anger too).