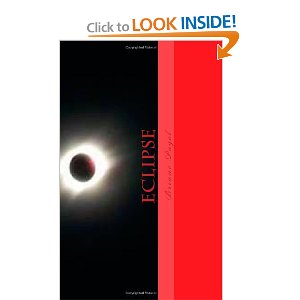 I finished Briane's book Eclipse some time ago, and I have to admit, it is the most cerebral read that I've found while combing the endless books written by independent authors that are begging to be read. I give it five stars out of five.

Now when I say "cerebral" I'm not saying that it is difficult to read. I'm saying that it is challenging to really know what is going on. It's like reading one of Brooke R. Busse's flash fictions that she posts on her blog. Half the time I have no idea what it is that she's writing about.  So if you buy this book, you are purchasing a puzzle. I personally have my own ideas of what is going on with the book but you'd have to look at my review on goodreads. And it is just that...ideas. Mr. Pagel has not elaborated at all as to whether I'm correct or not. Also know that the book is short...novella sized. You can read it in one sitting easy so this is not asking you to set aside weeks to plow through a book. This is something you could flip through while waiting for your turn at the doctor's office.

Mr. Pagel keeps many blogs but the one that I follow the most is Thinking the Lions. I urge you to follow him there (click on link) because he's funny, witty, and I think it's always nice to be friends with a lawyer. :)

For fans of Mulholland Drive, Twin Peaks, Eraserhead, and the Tree of Life...this book is for you.

Without further adieu, I give you the man that dared to eat a Twinkie on his blog that was so rancid, I thought for sure he was going to get sick.
Q: If Eclipse were to be made into a movie, who would your dream director be? Myself, I would choose David Lynch as the cerebral quality of your writing seems to be spot-on with Mulholland Drive, Eraserhead, and even his film adaptation of Dune.

A:  This is hard because I don't really know directors. David Lynch's Mullholland Drive has the feel that I want for Eclipse, a kind of "what the heck just happened" feel, so he wouldn't be bad. But Tim Burton might be able to do a good job of putting a creative spin on it. The book isn't Tim Burton-esque at all, but I'd like to see what he'd do with it. I think a movie should do more than just parrot the written material; the visual and audio element to film both restrains the imagination and adds a new dimension to the work, and I think the interface where my imagination and Tim Burton's meet would be a great place to start Eclipse: The Movie.
Q: You indicate that Eclipse may have been a collaboration with a friend of yours who might have acted as your muse to egg you to finish this project. How exactly did this surreal story come together?

It actually was a collaboration with The Boy, my eldest son you might know from reading Thinking The Lions. He gave me the idea, which I won't repeat here because it actually spoils part of the story of Eclipse, and I ran with it, writing the first chapter to give him an idea how I'd start it. He read the first chapter and said "Make it weirder," so I did. The use of Pink Floyd, Led Zeppelin and other hard-rock lyrics in the book was a sop to The Boy, who was going through his 70s-music-phase at that point.

Q: Upon finishing your book, what reaction do you want from your reader?

A:  "What the heck just happened here?" is the primary effect I'd like. The book has so many possible interpretations that I'd want a person to think "Okay, that's what it meant" and then later on say "But what if this" so that the storylines and imagery are constantly revisited. So far, people who have read it have almost uniformly come to me and said "So, was it real?" about one aspect or another. I love that.
Q: Eclipse is really literary art. You do a lot of bold things with this book that probably made it difficult to market to agents and publishers. However, if you wanted to pitch it and could do so in only one sentence before the agent of your dreams, how would you pitch Eclipse?

Q: Having self-published, what advice do you give to those who may be looking to follow in your footsteps?

A:  I self-published because I am impatient with the "real" publishing process. I don't want to spend my time writing query letter and I don't want to have to conform my writing to what someone else expects.

I write because I enjoy writing, first and foremost, and secondly because I enjoy hearing from people about my writing, and if writing and being read is your goal, self-publishing is the way to go, because you have absolute creative control over it and never have to query yourself.

With that said, I make 98% of my money from my day job, and 1.9999% of my money from my blogs; the remainder comes from my books. My books are not money-makers. Yet. Selling books is like selling anything else; you have to work at it. If you want to make lots of money with your books, you have to either convince a publisher that you're the next John Grisham so they will put your book in giant stacks in the front of bookstores, or you have to relentlessly push your book in every forum imaginable and convince the public that you are the next John Grisham. I'm not going to quit my job and start going to Comic-con to sell my book, because then writing would just be another job instead of something that I have fun doing and can make a little money at.

But I said "yet." All success is a combination of luck and hard work, with the hard work creating more opportunities for the luck to strike. I market my books and market myself to a certain extent, and hope that I'll get lucky and the right person will read it and it'll start catching on. If it does, I'll finally buy that place in Hawaii. If it doesn't, then, well, I still got to write exactly the story I wanted to write and had fun doing it, and people occasionally review it or email me and tell me they loved it. That means a lot to me.

Q: If you were to pick one novel out there that could stand on the shelf next to Eclipse and be similar by tone and subject matter, what is the name of that novel?

A:  The Illustrated Man, By Ray Bradbury. Not a novel, but a set of short stories that I read when I was 12 and have never forgotten.

Buy Eclipse on Amazon for only .99 cents on your Kindle :)


Have a great Thursday.
Posted by Michael Offutt, Phantom Reader at 1:07 AM