Do You Want A Flying Car? I Do!

I like sci-fi. I suffer through horrible movies on the SyFy network, I read sci-fi books, and I go to the movies trying to find more sci-fi. I even write sci-fi (though nothing is published. But I look up to most sci-fi writers and peers who dare to pen the next sci-fi novels as heroes) Here's a shoutout to Munk Davis on his blog as his sci-fi novel is going to be published soon (and yes I plan to read it).

I remember when I saw Back to the Future 2, I thought...wow...the future is going to have flying cars.  Well, all the future has provided thus far is more wrinkles and a slower metabolism.  However, the flying car may just be around the corner.

A car/plane hybrid its inventor calls a "roadable aircraft" is finally just around the corner.

The Woburn, Mass.-based company Terrafugia already has customers placing $10,000 deposits for the light two-person Transition plane, which the company plans to begin producing at the end of 2011 or early 2012. Awesome, eh?  Or maybe I should say, "Awesome for the rich, eh?"  But ya know...stuff will trickle down to my level...it'll just take longer.

There is one hitch. You won't be able to fly from your own driveway.  You'll still need to drive to and take off from an airport, where the wings will extend in 20 seconds. But before and after you get there, you'll be able to drive legally on regular roads.

So why is it taking this long to make that sci-fi dream come true? Turns out the reason more than 100 prototype flying cars failed to make it to market was less due to technology troubles and more the fault of marketing woes. It's not easy jumping through all the regulatory hoops required to be deemed worthy for both air and land, and keeping the FAA, the National Highway Traffic Safety Administration and other agencies happy can be an insurmountable problem. 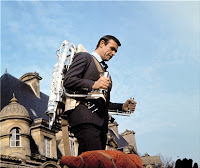 But Carl Dietrich, one of the cofounders of Terrafugia, seems confident that they'll be the ones to get it right. Says Dietrich, "This has been just around the corner for 50 years!"