Tomorrow Is The 2-Hour Camelot Premiere

I'm a huge fan of King Arthur stuff. So I guess my blog today is a reminder to everyone that shares my enthusiasm that Camelot by Starz is going to air tomorrow with a two-hour premier. I'm already set to record it just in case something comes up (like surprise parents rolling into town) etc., that may seek to pry me away from being planted in front of the television.

I've become a real couch potato. It's wierd...I never thought I'd be THIS into television. But in my defense, I think that television these days has a ton to offer. I think I prefer television over movies unless its the summer season and all the huge hits are coming out...then yeah...I like movies better.  There's just no competing with 3D and DBOX (I may blog about DBOX later in case you have no idea what that is).

Above is the second trailer to the very "adult" version of this tale. I want to say, "Finally! A proper R-rated show here." I mean, hats off and all that to all the clean singing cartoon versions of this story but I think I'm ripe for a little skin and some nice adult situations. So yeah, if you're gonna watch it...I think the kids should be in bed. 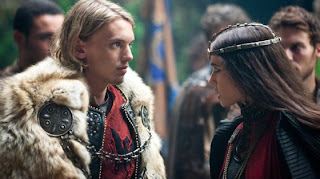 At left is Arthur and the actress that plays Morgana. I'm pretty sure we can expect Morgana to have some nude scenes and probably Arthur will be showing some skin too (programs usually are conservative on the guys).  However, the show's producers are the same that brought us Spartacus: Blood and Sand so most likely, nudity will be splashed on the screen as much as it is in that show. 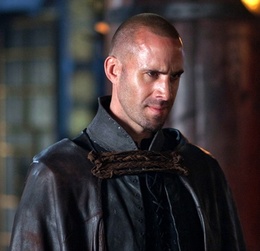 Next up is Joseph Fiennes who's taking the role of Merlin. You may know his last name from another Fiennes who plays Voldemort in the Harry Potter films (although he looks like a dude with no nose in those films I guess cause it makes him serpent-like or something akin to that). Interesting that two Fiennes are carrying such powerful wizards to the silver screen.
I kind of wonder why they chose to make him bald. Maybe in this particular rendition of the tale using and channeling all that magic causes you to lose your hair.

Anyway, I hope someone out there will watch this so that you can be my Camelot gossip buddy (Gazes at S.M. Schmidt to pressure her into watching the show). Seriously ladies, if you don't mind a little adult content the manuscript can wait a night.  Put it off to the side...yes that's it...put the keyboard away Misha and come sit on the couch with the popcorn and enjoy yourself.  Sara, your next chapter of "Social Skills" can wait and so can all your friends on G.A.

I'M A LOVELY BLOGGER AGAIN (You should be jealous):

Ciara over at her blog recently gave me the One Lovely Blog Award again.  I already have a copy of it in my Awards section but I'm honored to receive it again :))) If you haven't stopped by Ciara's to say hi be sure to do so because she is amazing and her blog is indeed lovely.

I bequeath the Award to T.D. McFrost and to Munir at her blog entitled Focus :) because these two are both overachievers and you really should check their blogs out.
Posted by Michael Offutt, Phantom Reader at 7:49 AM

Email ThisBlogThis!Share to TwitterShare to FacebookShare to Pinterest
Labels: Camelot