I really wasn't intending to write a review of Saturday night's concert but after seeing it, I was so stunned at how awesome it was that here I am doing just that :)

Lady Gaga was everything that I expected her to be and more.

Before the show, there were these huge television screens that people in the audience could text and Lady Gaga responded to the texts so it was like watching a huge chat room.  Plus, all the proceeds from the texts were going to her favorite charity (she donates $20,000 from each concert to help homeless LGBT youth that have been kicked out of their homes.

When she took the actual stage, the lights dimmed and everyone in that sold-out Energy Solutions Arena (a crowd of 20,000) absolutely screamed. There was this four-story curtain that separated the stage from the general admission crowd that started showing a black and white short film to her music that slowly became more transparent revealing what was behind it.  In silhouette was Lady Gaga in costume, standing on ironworks, overlooking a beat-up rolls royce with the license plate "Gaga".

Then the show started and wow was it good.

Before she started to sing her "Telephone" song much later, she called one of the numbers chosen randomly from that billboard and the girl that answered it got a spotlight on her (she was in tears). Lady Gaga told her that she was the ambassadoress of her favorite charity that night and represented all of those people that had donated, thanked her, and invited her backstage after the show to have a drink and get a picture taken.  How sweet is that?
﻿
﻿Lady Gaga impressed me on so many levels. Her vocals are astounding (keep in mind I'm not musically trained but they blew me away) and she said she wasn't lipsyncing in her own way, "No one wanted to come out to this concert just to see some blond bitch lip sync!" She was also incredibly humble. While playing the piano version of "Born This Way" to a suddenly quiet audience focused on her, she asked for us to remember that her album comes out May 23rd.  Here is the biggest pop star in the world, smiling, being appreciative of her fans, and reminding us of her release date.  I was taken aback by it. I've been to concerts before...Elton John wouldn't have done that. He would have just assumed you had nothing better to do than follow his greatness and be in line at the proper time. 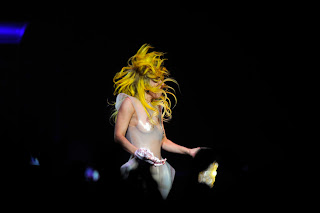 Lady Gaga also stopped the show several times with profound messages. But the one that hit me personally was that she told us about how she was a nobody that got bullied, that got told by other people that she was a failure, and that she'd never make it.

She said to all of us in the audience to not believe that.

Hold on to your dreams because they can and will come true.

Don't let any one person bully you and tell you that you are a freak. 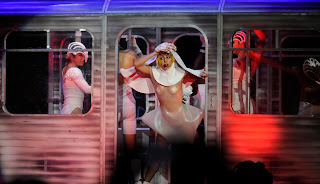 If you feel that you are a freak, she said, look around you because this whole place is filled with fellow freaks. Twenty thousand like-minded individuals. She said that she'd made a home for her little monsters that night and that her song was sitting proud at the number one spot in America for the fifth week in a row and that nothing looks better than a number one done with a middle finger.  Then she stated that tonight, the people on the outside that judged her and judged any of us were the freaks.
So there it is...I'm passing this message on to you.  Hold onto your dream.  If you ever thought you were a freak for anything you believed in or wrote, you aren't.  Don't let any one person bully you or destroy your dream. You were brought into this world perfect just the way you are. Stand up and be proud because just like Lady Gaga, you are amazing and the world will take notice of you. Any of us that haven't found an angent or a publisher for our work, well...we're just in a BAD ROMANCE with publishing right now. But it won't last forever...our break is going to happen. Hang in there my colleagues and don't ever let life get you down.

You are wonderful and don't ever forget that.
Posted by Michael Offutt, Phantom Reader at 7:36 AM

Email ThisBlogThis!Share to TwitterShare to FacebookShare to Pinterest
Labels: Lady Gaga, You Are Wonderful