Why was there so much red matter in a containment field in the 2009 Star Trek movie?

So I came across Star Trek on cable one night this week (I think it was on AMC), and it was the J.J. Abrams reboot that happened in 2009. I hadn't seen it in a few years, and I only watched some of it, because I was headed to bed. The part I did watch was the "red matter" scene, where the Romulans inject a drop of red matter into their drill that is going to attack Vulcan in order to make a hole deep enough for them to fire a torpedo into Vulcan and cause its collapse into a black hole. This is where (for the first time) I kind of blinked and asked the question, "What is red matter anyway?" I figured that the internet would have stuff written on it. And it didn't disappoint. So today's entire post is an essay of sorts on exactly what "red matter" is, because I figured you guys would all want to know. It's like that itch that you didn't even know you needed to scratch from the pseudo-science from a movie that is already thirteen years old and where one of the main crew members has already passed away. How time flies. So ready? Here goes.

Red Matter in J.J. Abrams's reboot is a substance capable of forming a black hole when ignited. One drop was sufficient to collapse a star or consume an entire planet. From what I can gather, it was originally created by Spock, and his idea was to use it to reinvigorate a dying Romulan sun, but it didn't work, and the result was the complete and utter destruction of Romulus. So...my brain was like...okay, then why was there this much in the movie (picture below):

Like...that is a ridiculous amount of red matter. I don't know how dangerous all of that stuff is, but one drop can cause an entire planet to disappear into a black hole. So this led me to question, "Why would Spock make the above when all he needed was a single drop?"

Here's what I found out. Getting this out of the way, I'm not the first person to ask this question. And there is no answer other than maybe he thought it would be nice to have extra for other applications. Who knows? However, the Vulcans were not overly keen to have a potentially world-ending substance sitting around in their science facility. In the comic book (I shouldn't have been surprised that there was a comic book) Geordi LaForge and Spock indicate that red matter is very unstable. They had to build a special container on Spock's ship (named the Jellyfish), and that ultimately became the safest place to store it. That's why there's such a huge amount of it on Spock's ship and nowhere else. They also seemed to think that it would be okay to jettison whatever was left into the singularity that formed and it would just disappear into the black hole like everything else. That seems weird to me, but I don't understand black holes anyway. So I suppose that sounds like a good idea. Like...where else would you store it safely? 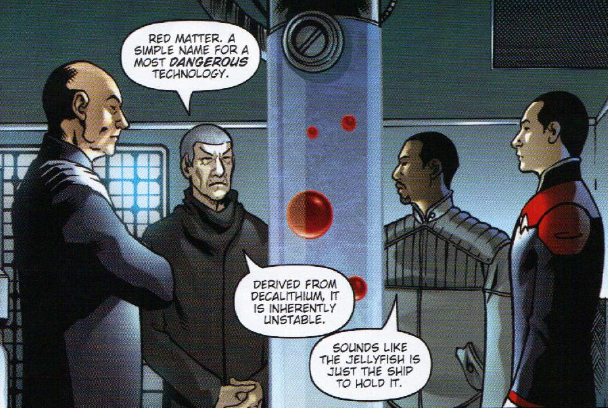 And finally, I guess that all of J.J. Abrams's movies and productions have a red ball placed somewhere in them. I've never noticed this. But it is an Easter Egg for his movies. There is one in the Alias pilot, and people who work with J.J. wonder where the red ball is going to show up. So the red ball in Star Trek was impossible to miss, which may be an indication of how excited J.J. was to direct the movie, even if its disruption to canon has riled many Star Trek fans.
So, now you know as much about "Red Matter" as I do. It's one huge macguffin, and an inside joke. Are you satisfied? Did it scratch an itch you never knew you needed to scratch? Have a great Labor Day weekend. I will be back on Wednesday with an Insecure Writer's Support Group post.
Posted by Michael Offutt, Phantom Reader at 8:50 AM

Email ThisBlogThis!Share to TwitterShare to FacebookShare to Pinterest
Labels: red matter, Star Trek 2009, Why was there so much red matter in a containment field in the 2009 Star Trek movie