Timothée Chalamet said that societal collapse is in the air. I think he's right. 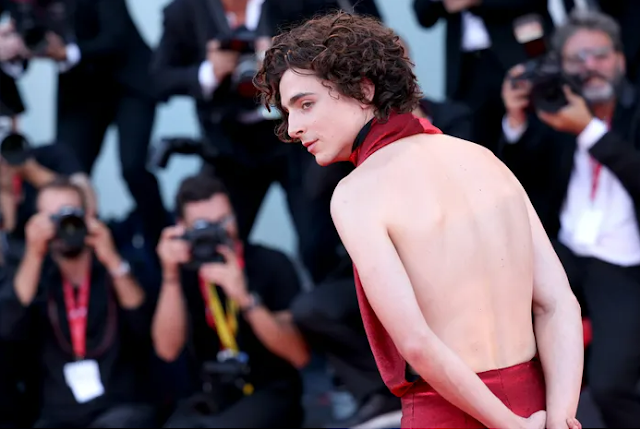 Timothée Chalamet (while wearing what looked like a backless red dress thing) said something that caught my attention. It happened at the 2022 Venice Film Festival. He was there to promote the cannibal love story (yes there is such a thing) called, Bones and All. I haven't decided if I'm going to watch the film. I like Chalamet very much. But "very much" these days rarely means I'll go out of my way to watch something a person is in. It just means I appreciate them for what they do, and I follow them on Instagram. So what did he say?
Timothée said, "It's tough to be alive now. I think societal collapse is in the air--it smells like it."
I have to say, I wasn't expecting him to say that. It was a "drop the mic" moment, and shook me out of what I was doing so that I could be fully living in the present. Being "present" is harder than it sounds. There's a lot of us that struggle with this, especially with the ubiquitous "smartphone" within hand's reach. But what Timothée had to say struck a nerve with me. I think he was speaking honestly, and I kind of agree with him. But what does that mean exactly? What does societal collapse look like? Here are a few of my observations, taken from a guy who lives in a state that was recently discovered to have the most aggressive and dangerous drivers in the United States. I can confirm, it is bad here to be on the roads. Nobody cares and its every person for themselves. Psychologically, this kind of thing can be expected when people are both very entitled and very selfish (you can see I have a high opinion of my fellow human). But I digress...
My firsthand observation of the collapse of society looks like the degradation of humanity via a mental health crisis. I also think that our society is at a point of no return. This mental health crisis around the world, but most particularly in the United States, is largely fueled by greed. It takes the form of political greed, corporate greed, the fossil fuel industry, big pharma, employer greed, professional sports, religious greed, and greed within families. Is there anything that embodies the image of pure greed more than "royals?" We were treated to a spectacular show this week with the funeral of Queen Elizabeth II. The entire time I saw snippets of this, I asked myself, "Why are these people better than anyone else? What gives? Why do people send so much money to others like this?" I had no answers for any of my questions. I only had co-workers who are barely getting by themselves who were in tears because this incredibly rich and entitled woman died. What a mind job, man. It's like everyone has Stockholm Syndrome, where they sympathize greatly for their abuser.
This avarice for more and more is seen as the highest standard, a so-called badge of overall life success, without any sense of compassion or concern for anyone else. When a Queen dies millions mourn and lament the passing of a person that probably never had to hustle to get dinner ready after working a 10-hour shift. When a homeless person dies, people just complain at the stink and step over the body if it is on the sidewalk. The constant barrage of consumerism and the widening gap between the haves and the have nots tremendously affects mental and physical health. Most of us (including myself) feel like we are running on a hamster wheel with little or no incentive. Our annual wage increase, if we even get one at all, doesn't even come close to covering the cost of living. Then after taxes and healthcare premiums, we've taken two (or more) steps backward. But by all means, let's shed tears for the Queen and not even think about the destructive swath British colonialism wreaked upon the world in the centuries it was allowed to endure.
I think that a lot of people who share my values feel powerless and hopeless about the future. From where I'm standing, American society resembles a dystopia of social disconnection, gun violence, and confusion over the most fundamental facts one should know. No wonder the catchphrase for 2022 seems to be "quiet quitting." In any other context, people would see that particular phenomenon as just setting healthy boundaries. But in 2022, where people are shoveled crap by the bucketload, "quiet quitting" is the term that summons rage at the idea of another person just doing the bare minimum to get by, as if that is somehow shameful to even contemplate, given how toxic to mental health everything has become.
Posted by Michael Offutt, Phantom Reader at 7:00 AM