Lower Decks is back with season 3 and Bradford Boimler is my favorite character. 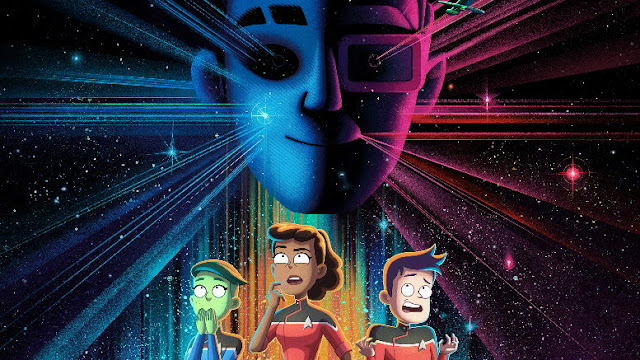 With the launch of season 3 of Lower Decks on Paramount +, I think my favorite character is Bradford Boimler. Voiced by Jack Quaid who plays Hughie Campbell in Amazon's The Boys, the character of Boimler takes himself very seriously while everyone else does not. That's kind of his running gag, and it does seem to work. He also has a lot of the "Sheldon Cooper" obliviousness which maybe is an homage to Big Bang Theory which in its long run had many of its own homages to Star Trek. It may just be that geek culture in general is one big bathtub and everything just sloshes around in it constantly. So, if you are a geek, then you see all parts of the tub equally, and they all affect what you like equally.

Thus far in season 3 we learn a little more of Boimler than we did in previous seasons. The first thing that surprised me was the sight gag of "Picard at the Vineyard" before the Boimler reveal (meaning it was Boimler at his own vineyard and not Jean-Luc). I had no idea that Boimler had that kind of money in his family. But it could be that it was just meant to be another gag. And then, it was funny to see Boimler being ogled as a sex object by all the people at the vineyard (mostly women) who were literally throwing themselves at him. But in Sheldon Cooper style, he had no idea what was going on and gave them instructions quite literally whenever they would complain about "getting stains on their shirt," etc. I don't know why that kind of humor lands with me, but it does. So yeah, I laughed out loud multiple times.

I also hadn't realized that Boimler's hair was actually purple. I guess in the animation, I assumed it was kind of a blue black thing. I've seen people use black and then blue to explain highlights in it. But I hadn't given it much thought. And then Boimler said he dyes his hair purple. So, that explains it. But now I'm wondering why he dyes his hair purple.

The season three opener also had the lower decks crew playing a kind of Star Trek version of Dungeons & Dragons. So of course I liked that. The "DM" in this case (who is the one that runs the game) was the Klingon Martok from Deep Space Nine days. He said a line that reminded me of my friend Joseph, who runs some ridiculous games where he has encounters that just end badly for players and that don't make a lot of sense rules-wise. This is actually common in the D&D community, because a lot of people who run games don't really know how to run them. It can be hard to get a mastery of encounters, and much of the time, DM's just want to kill player characters probably because they've convinced themselves that by doing so, people will take them seriously. It's kind of how George R.R. Martin has an oversized influence on fiction by being one of the first authors to really "kill his darlings." A lot of people just don't like to do that, so you end up having these laughable critiques like, "Galadriel has plot armor. Nothing can happen to her even though they are trying to make this seem dangerous."

Anyway, so the line that Martok says in season 3, episode 1 of Lower Decks happens when Brad Boimler declares that his character is going to do a thing, and then he rolls a twenty-sided dice. It comes up a "1" which is a critical failure in just about every scenario. The Martok character laughs and says loudly, "The Klingon warrior rips your arm off and beats you to death with it. It is a death WITHOUT honor, because technically you died by your own hand." It's a quote that stuck in my brain, and by which I've teased my friend Joseph with several times now. When I did it the first time, it was at his game that he runs at the local game shop, and his players all agreed, "Yeah, that's Joseph."

The season opener also had a holographic James Cromwell making his inaugural warp flight from Bozeman, Montana in it. This was featured in the movie First Contact, which came out sooo long ago. Man, does time fly. Anyway, in the Star Trek universe, civilian space flights actually take off from a theme park in Bozeman, Montana. I couldn't help but think that someday this is probably going to happen somewhere on the planet. Only it won't be a holo James Cromwell doing the piloting. It will be a holo Elon Musk. And this sadly means that I'm living in the screwed over Mirror Universe, as if that wasn't apparent already.

Posted by Michael Offutt, Phantom Reader at 9:09 AM