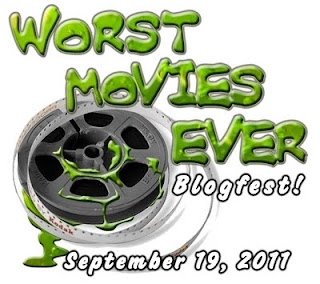 Super blogger Alex J. Cavanaugh is hosting the "Worst Movies Ever" blogfest today.  Here's the blurb for it that appeared on his blog:


On Monday, September 19, post a list of up to ten of the worst movies you’ve ever had the misfortune to watch. Films that just oozed awfulness and featured plot holes so big you could drive a bus through them. Any genre or year, but only theater and straight to video/DVD titles. (Otherwise we’d all list every movie ever made by the SyFy Channel!) Sign up, grab the button, and on September 19, give us the worst! And be sure to visit others participating in the blogfest.

My pick for worst movie ever is The Human Centipede.  Here's the plot:

Two American college girls become the subjects of a sadistic medical experiment while on a road trip across Europe. Invited to a party by a handsome waiter, Jenny and Lindsay are en route to the festivities when their car breaks down in the middle of nowhere. Desperate, they decide to seek help on foot, eventually coming across the home of a retired surgeon named Dr. Heiter (Dieter Laser). Dr. Heiter is internationally renowned for his work on separating conjoined twins, but these days he's using his surgical skills for something entirely different. His goal is to create a human centipede by removing his patient's kneecaps, and sewing them together, mouth-to-anus. The only thing preventing Dr. Heiter from carrying out his experiment is a lack of human subjects. When Jenny and Lindsay arrive on his doorstep, Dr. Heiter enthusiastically begins prepping for surgery.

The Human Centipede is a terrible film.  But I'm not going to explain why it is terrible. Rather I'm going to just paraphrase what Roger Ebert has to say about this film:

I am required to award stars to movies I review. This time, I refuse to do it. The star rating system is unsuited to this film. Is the movie good? Is it bad? Does it matter? It is what it is and occupies a world where the stars don't shine.

The only remarkable thing about The Human Centipede is that it has spawned all kinds of memes. Even Southpark did an episode called the Human Centipad (which ended up being hilarious).

So yeah...save yourself about ninety minutes and avoid this film.
Posted by Michael Offutt, Phantom Reader at 1:45 AM