Getting My T.V. On

Now that the Emmy's are over and all the television shows that I love are starting up, I decided to do a post about them to 1) organize my thoughts and my DVR and 2) to let you guys know about them in case you want to watch them too and then we can gossip about them. Please say you are nodding your head yes. 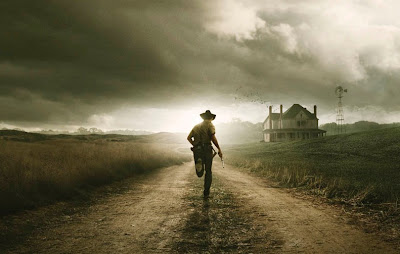 Right now I watch Breaking Bad but as soon as the season is over, the Walking Dead starts in the same time slot on October 16th.  And oh I'm so excited.  Above is the poster for season two and it looks so apocalyptic it just draws me in.  Here's the teaser trailer for the season:

Before AMC's hit series launches into its second season on Oct. 16, we're going to learn exactly what kicked off the zombie apocalypse—through the eyes of one particular zombie.  In Walking Dead's pilot episode, "Days Gone Bye," the good sheriff Rick Grimes stumbles out of a hospital to see a world ravaged by an unseen event that caused the dead to not stay dead. One of the first things he encounters is a legless zombie, slowly making her way from an unseen Point A to an indeterminate Point B.

A new six-part web series, directed and conceived by Walking Dead FX maestro and co-executive producer Greg Nicotero, will tell the story of this zombie—also known by her given name, Hannah—and, through her, reveal the early days of the zombie-laden hell on earth.

The web series will premiere on Oct. 2. The nightmares will begin shortly thereafter.

MONDAY
The Alphas season finale is on 9/26. Coinciding with that is Terra Nova in a huge two-hour series premiere and it looks really frickin' good.  Check out this trailer for it:
Also I shall be watching the new season of House. At the end of last season he drove into Cuddy's home and the preview for this season has him in prison. It's going to occupy the time slot right after Terra Nova so I can watch these or DVR them back-to-back...squee.

WEDNESDAY
This week is the one-hour premiere for Modern Family.  I love this show because it is so funny and the gay couple is refreshing too. Also on Wednesday night is season two of Harry's Law.  I gotta get my court drama in and I absolutely love how Kathy Bates plays Harriet.

THURSDAY
Big Bang Theory beginning with episode 1 entitled, "The Skank Reflex Analysis". After the season four "walk-of-shame" done by Penny after having slept with Rajesh...Penny reveals she wants to be "just friends." Raj replies, "Well as friends then you may want to know that we didn't have sex in the conventional manner." Insert awkward look.   And...I may peek in on Bones even though they really pissed me off with Vincent's death.
FRIDAY
Double whammy of Supernatural season 7 premiere and Fringe season four premiere.  Oh I love you DVR.
So this is what I got lined up. Is anyone else out there passionate about t.v.?

And I swear I am not addicted to t.v.  So none of you get into your minds that you need to stage an intervention.
Posted by Michael Offutt, Phantom Reader at 1:02 AM