The Boomers entering assisted living is probably going to crush the healthcare system in the United States or usher in universal healthcare. 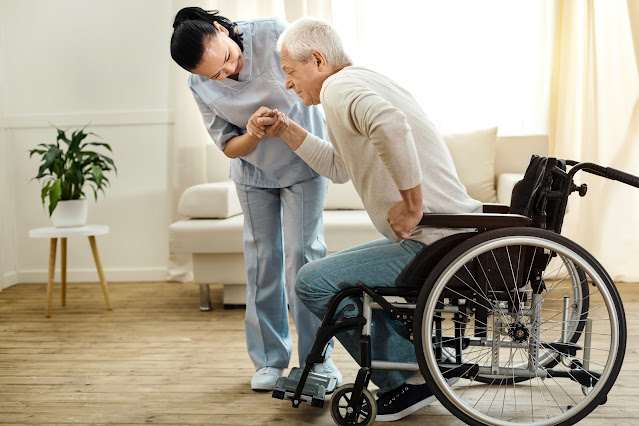 For many years now, my last surviving parent (father) has been in assisted living care. The cost has been a staggering $1200.00 paid out every seven days from his estate, and this hasn't been covered by insurance. This morning (for some reason) I decided to google "Why is assisted living so expensive in the United States?" And I landed on a Quora page with the most intelligent and insightful (concise) reason that I just had to blog about it. And then I want to talk about what it may mean for the future. But first, here is the answer that I got that was so fantastic:

"Because they are private for-profit facilities that take advantage of America's lack of healthcare for its elderly.
"In countries with universal healthcare, people don't have to go bankrupt to pay for their parent's care. The for-profit model knows that they can wipe out the life savings of a senior and take any form of inheritance laid aside for their children, and there is nothing anyone can do about it.
"If your parent becomes impossible to care for in your home, you have to pay for it. Therefore, they charge it because they can, and because the United States government won't pay anything until you are down to your last $2,000 in assets. It's a system of robbery that pays the workers (who are usually foreign) very low wages and offer nothing close to the luxury that $10,000 a month should provide.
"It's an unsustainable business model that is able to do this because the WWII generation lived in a cheaper America, and they were able to save more. Once the Boomers start entering care, there will not be this plethora of saved assets and either the U.S. Government will need to implement universal healthcare or seniors will collapse the system."

Wow! First off, this was an incredible post made by someone going by ED L on Quora. Additionally, from my personal experience, it is 100% correct. Like...there is no error I can see here at all. So let's move onto my analysis of what's being said here and what it means for the future.

Folks, the Boomers are about to crush the system. Huzzah! It's all going to come crashing down. This has kinda got me a little excited. Sure...there's going to be lots of suffering and crying, but when it all crashes, I'm going to have fun looking at the Republicans who opposed universal healthcare and feel mighty smug about being right on this. I don't have kids, so the system crashing is not going to hurt me as much. But it's going to smack these huge family units in the ass. Hard. And I just can't wait until it happens.

And furthermore, just more validation that capitalism like we have in America absolutely sucks just makes my day. "How dare you want socialism! Don't you know that you'll pay more in taxes?!" I don't know how many times I've been told this by an ignorant person, even as my taxes go up all the time due to Republicans in Utah taxing everything. They are even discussing at the Legislature level about taxing food delivery, which is absurd. And Utah is one of only four states that taxes social security, which has been taxed already. But they have a good social media game with, "We support lower taxes!" What they mean is, "We support lower taxes to rich people and corporations!"

I mean...what's the alternative? Force old people onto the streets? How on earth will they be able to live with themselves, especially if they are Christian? It's going to be fun watching the greedy and righteous squirm. At least they can blame Obama.

Anyway, I thought I'd share this nugget of wisdom from Quora. It made my day. I hope it makes yours too.

Posted by Michael Offutt, Phantom Reader at 7:20 AM

Email ThisBlogThis!Share to TwitterShare to FacebookShare to Pinterest
Labels: Blogging, The Boomers entering assisted living is probably going to crush the healthcare system in the United States or usher in universal healthcare