It's a little weird thinking that the new Hellraiser movie on Hulu is a Disney property. 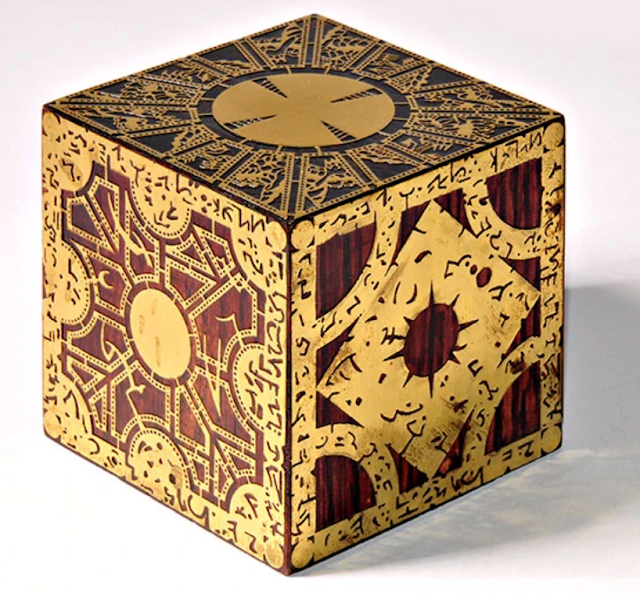 Horror movies are not my thing. However, I'm going to watch the new Hellraiser movie when it hits Hulu on October 7th. I've always been a fan of Clive Barker, and the mythology he created. I also read the story which Hellraiser is drawn from called The Hellbound Heart. In this short story, Frank (one of the deranged main characters who is an extreme hedonist) opens the Lament Puzzle Box expecting to be greeted by beautiful angelic beings. What shows up are a cadre of very evil BDSM demons who have no safe word. If I remember correctly, in the novella the Cenobites actually give Frank a choice.

In the movies that I've seen, this illusion of choice is not really so spelled out. When someone solves the box, they're essentially entering into a deal with the Cenobites. This is the form of "consent" that the demons require, before they begin an excruciating session of agony that ends with the person who summoned them being ripped to pieces by meathooks or something just as awful. In other words, these supernatural and demonic beings can't just go about murdering and killing. They have rules that they must follow.

The thing I liked from the trailer for this Hulu reboot is that it actually looks like the director and the producers cared about what they made. It feels like there are actual production values at play here, and that they put some real money and effort into the project. They also appear to be honoring the intellectual property quite well, by making references to things that we've seen in the prior multiple movies, including drawings of the different configurations of the puzzle box. This "puzzle box" is the magical MacGuffin that lies at the center of the story. Mysterious and powerful, we don't ever really know what it can do, and in this aspect, it is similar to "the one ring" in the Lord of the Rings stories.

The Hellraiser mythology also includes a bit about this thing called a Leviathan, which is a Lord of an infinite labyrinth that might be a fallen angel of some kind. In one of the Hellraiser movies, this Leviathan makes an appearance as an octahedron that floats above the labyrinth sending out black beams which (when someone is exposed to them) makes you relive all of your sins. This thing apparently rules over everything, and the cenobites serve it, by funneling souls to its pit to serve out their damnation. As it spun above the labyrinth, it emitted a fog horn-like sound that was Morse code for the letters: G...O...D. I assumed that this meant that it was repeating over and over that it was a god and worthy of worship. Hard to argue, given how powerful it obviously was.

Anyway, I don't normally watch horror movies. But this one has enough supernatural and fantasy angles to it that I'm going to watch it. In fact, I'm kind of looking forward to it. If you haven't seen the trailer, I might recommend to you to click the one I've embedded below and give it a good look.

Email ThisBlogThis!Share to TwitterShare to FacebookShare to Pinterest
Labels: Clive Barker, Hellraiser, It's a little weird thinking that the new Hellraiser movie on Hulu is a Disney property