House of the Dragon is a great reminder that the human race is a miserable species. 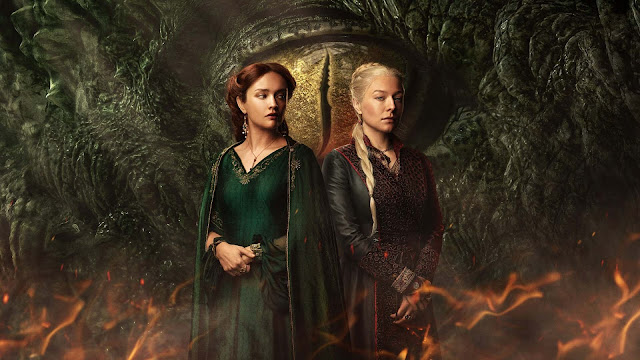 The world that has Westeros in it (A Song of Ice and Fire) is brutal. We saw this in Game of Thrones, which ended its historic run some four years ago. With House of the Dragon I'm reminded at just how grotesque the people are in this world. But my own naivete would be to think that this is abnormal. That the people of "Earth" couldn't be this gross, could they? But a little digging and a little delving into history (and into modern headlines about what's going on in Ukraine and Russia) makes me think that George R.R. Martin was (if anything) simply a really good study of history and human behavior. And just to be clear, modernity has not changed this. Humans in 2022 are just as gross as they were in 1222. In other words, all the incest, rape, and murder he puts on display in his stories is just par for the course as far as humans are concerned. We (human beings) are awful. Take for example some of the things we've seen just this season in House of the Dragon. This list of things are drawn from human examples.
For one, bastards popping up to cause problems with family dynasties is a reflection of real-life things that happened in kingdoms on Earth. Infidelity aside, siblings murdering other siblings was a real thing that people did in order to seize power. The character of Alicent, who was Rhaenyra's best friend when they were teens, got pushed into marriage with an older man (the king) by her own father and forced to have sex with him (leprousy and all). Imagine forcing your own daughter to have sex with a leper with oozing sores so that you could birth heirs to a throne. Who imagines this kind of thing? You don't need to because this kind of thing happened in real life history. She ends up having no friends and people (like her father) are manipulative to the point of getting both her and her kids into very dangerous situations. Add to this situation that she is "god fearing," and you understand why she is so hateful toward her former friend who get to bed whomever she wanted as opposed to what lay in store for her.
There's Daemon Targaryen played by Matt Smith. His monstrous behavior at killing his wife so that he can be free to marry another just smacks of King Henry VIII. The fact that one of his wives takes it into her own hands rather than let him decide to slice her up to save a baby that is in breach and just immolate herself to death seems...I don't know...realistic if not horrifically grotesque. Then there's the self-loathing knight of Ser Criston Cole who brutally murders the knight of kisses for pointing out that he knows that Criston has obviously bedded the princess (at least that is my take).
Self-loathing is so destructive. You see it in the gay community when a politician is gay but they are deeply closeted and married to a woman, denying everything about themselves. They may not murder someone, but the vitriol, anger, and hatred from a self-loathing man in this position is probably the most dangerous thing there is to the sustained well-being of a society. And I can't imagine how the family unit itself suffers. The man who is a closeted gay probably tells the wife that sex can only happen for procreation, hiding the fact that he secretly wants to just suck a dick. The obvious "my husband does not feel anything toward me sexually" causes more self-loathing in the woman, who thinks it may be that she isn't sexy, or is somehow gross. This leads to other problems like unnecessary plastic surgeries, more self-loathing, and mental illness. It's basically just beating someone to death like Ser Criston Cole did at Rhaenyra's wedding, only it takes years instead of a minute.
A healthy "Game of Thrones" scenario seems to be benign neglect. This is what you would want to pray for if you were born a woman in this world. The other kinds of things that can happen to you in this world (if you are a woman) are terrifying. The short list is 1) getting married off to somebody triple your age (and hope they aren't diseased), 2) being tortured or enslaved because you were not born a boy, 3) or just getting raped directly. If you have children, then there's the added possibility of watching them getting raped and slaughtered in front of you before the same fate is visited upon you. When a future alien anthropologist happens upon Game of Thrones, The Handmaid's Tale, and The Walking Dead, it should become clear why the human race became extinct. We are a miserable species, and some of our greatest writers know it to the core.
Posted by Michael Offutt, Phantom Reader at 12:22 AM