Three episodes into the Rings of Power I have a few observations that could be construed as nitpicks. 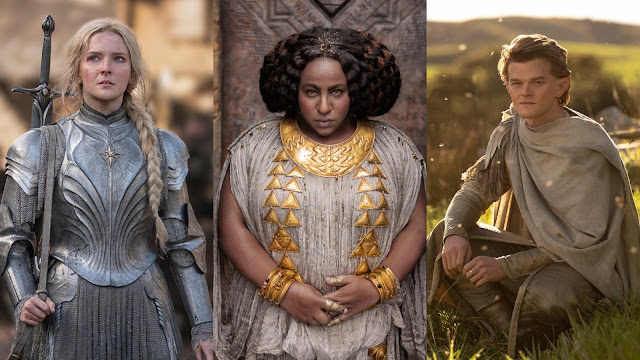 I'm three episodes into Amazon's Rings of Power. I am stunned by this beautiful and contemporary take on Tolkien's works. I also couldn't quite suss out a plot by the end of episode 2. However, episode 3 seems to have done a decent job in drawing it all together for me. My friend who watches it with me reminded me that a lot of Tolkien stuff takes a while to get going, so this should follow that same formula.

So what should I say about Rings of Power? Well, it's mostly observations. So, if you think my observations might be spoilers, then you should probably avoid them. However, if you too are watching the show, it might be useful to know if you noticed the same things that I did. So here are my first observations based off the beginning episodes.

The first is that the guy they've hired to play Elrond has the biggest chin I've ever seen on someone. In some shots, it honestly makes his entire face look like a crescent moon. I've joked with my watching partner that "Elrond must receive broadcasts from the future because of his chin." So that's been fun. It's also mean of me to body shame, but I can't help it in this case.

My second observation is that its weird that Galadriel jumped off the boat near the shores of Valinor and just...I dunno...decided to swim back to Middle Earth. This seemed so unbelievable to me that I commented to my friend, "This would be like diving off a boat in the middle of the Pacific and swimming back to San Francisco. It was utterly ridiculous. My friend reminded me that elves are badass. So, I shrugged and said, "Okay...I guess I can let this go. But it does bother me."

My third observation is that I think Halbrand who plays a man from the south (notorious followers of Sauron and Morgoth) is Sauron just kinda hanging out and being all hot and stuff. It's really weird. But he killed the people without a second thought at sea, and I think he saved Galadriel so that she would introduce him to the elves and so that he could help out with the rings of power (which they are about to get around to forging). It makes sense, because Galadriel kinda likes him and in the books and in the movies she clearly doesn't and calls him "the deceiver." So...I think he "deceives" Galadriel starting with this shipwreck and subsequent trip to Numenor, etc. And most of us who have read The Lord of the Rings books know that Sauron was a great smith, so him trying to help out in the smithy seems within character. If I'm right, it's just weird seeing Sauron eating dinner and hanging out. He kinda has a look with all that spikey armor that I'm not used to thinking of him like this. But I suppose he could look like whatever he wants to look like to accomplish his goals for his master.

My fourth observation about the show is that the Harfoots, who appear to be ancestors of the Hobbits, are incredibly cruel. They just abandon anyone that falls behind when they decide to move from one location to another. They actually have a word for it: "de-caravaned." And among some of the worst punishments are being at the back of the caravan, because it is more likely to lose the back than it is to lose the front. In practice, it looks like you can expect no help from anyone else in the caravan. You either follow under your own power and strength, or you just fall behind and die, and then they read your name out in a book once a year. It was honestly kind of grotesque, but whatever.

I suppose these are just nitpicky things. I'm enjoying the show, and I know it is difficult to create a fantasy world. They are doing better than most, and this is to say that I don't think I could have come up with anything better using only footnotes and appendices. Is anyone else watching, The Rings of Power? If so, what are your observations?

Posted by Michael Offutt, Phantom Reader at 12:20 AM