Here are all the thoughts I have about Rings of Power that must be said. 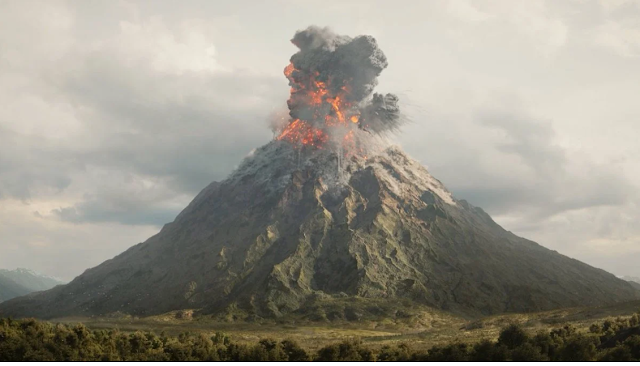 This last Friday, we were treated to a pretty spectacular episode of Rings of Power. The title of the episode was called Udûn, and from what I understand, in the Elvish Sindarin it means "dark pit" or "hell." Additionally, it is a valley of Mordor thought to have been formed by volcanic activity. Okay then.

In the events of episode 6, we saw (essentially) the formation of Mordor. I wasn't expecting this, but it was a real treat. I had just assumed that Mordor was always a choking ash-filled place of death. I never thought that it would have been green and lush with livestock around and people living there. I just didn't. And suddenly, I have so many questions and thoughts about what is going on in Rings of Power.

Using the magical handle of a broken sword, one of the humans (Waldreg) who swore allegiance to Adar (an elf that claims he killed Sauron, but obviously serves Sauron) in the last episode grabbed the handle and used it to "unlock" whatever it is that it was supposed to unlock. It turns out that it started a series of events that had been built (presumably) by Sauron. All of this is so damned unclear. But who else could engineer something like that? Here's what happened.

A dam that trapped a lot of water was released, the water flowed through tunnels dug by the orcs (so this was purposeful and maybe they got the message that these tunnels are essential for them to have a home), and it all emptied into the heart of a volcano which forced an eruption. I can only assume at this point, that this volcano is Mount Doom. And its eruption must create Mordor, which is a safe place for the orcs to live. They burn in the sunlight, and they really don't like green things at all. Smoke and ash and apocalyptic landscapes are kinda where they do their best thriving. And this suddenly made me understand that the orcs just wanted a place to live, and Sauron gave it to them.

So suddenly, I'm like...wait...the orcs just wanted a home? Am I becoming sympathetic to these blackened, slimy, crusty, ugly, and evil creatures? I mean...if I was an orc, I'd want a place where I could live and have baby orcs. I'm so confused now. Rings of Power is inserting all of these thoughts into my head that just weren't there before about this Tolkien property. But I seem to recall that Tolkien (somewhere) wrote that the orcs weren't inherently evil creatures. I just never assumed that this meant anything of real note here as it is a subtle thing to assume about orcs in Tolkien's Middle Earth. Like...what does that mean exactly? It turns out, it means a lot.

Here's another thought: I think Halbrand is Sauron, and Adar killed him like Gandalf got killed, but now he's back because some of the Maiar do that thing where they come back (sometimes more powerful). I also think that Halbrand/Sauron might have kinda wanted to go straight and just live as a Numenorian smith for a while, but Galadriel fucked that up. So suddenly I'm seeing that Sauron might not have been all bad (read this as he had good within him), and Galadriel has evil in her in that she's directly responsible for returning Sauron to Middle Earth (because she has a clear obsession with him). Additionally, there are such things as orcs who don't want to serve evil at least in the form of Sauron, but other kinds of evil. Maybe. Honestly, my mind has really been opened a lot by Amazon's take on this.

But someone might ask, why would Sauron be content with being a smith? I do remember something from The Silmarillion which described Sauron humbling himself and showing true repentance to Eonwe, the herald of the Valar, after Morgoth's defeat. Sauron was told that he would have to travel back to Valinor to beg forgiveness from the Valar directly, and then do many years of penance. Would you want to do that? Me neither. So suddenly, Sauron seems more humanized when I recall this tidbit of information. So Sauron, just like what we'd do, hides away until the Valar had all left Middle-Earth. So this is essentially what he's doing now, and killing time as a Numenorian smith seemed like something that wasn't "unreasonable" for Sauron to do.

And then there's the stuff about Sauron being in the North, and about trying to find some dark magic that eluded even him. I think this "dark magic" thing is probably Mount Doom. He needed to get that volcano going, and Mordor transformed so that he could use it to forge the One Ring. There's something special about Mount Doom. Maybe its fires burn hotter or there's some magical concentration of something that we don't know about yet that is crucial to him being able to forge the One Ring there. I need Amazon to tie the threads together for me on this, and relate it back to Celebrimbor and the super forge being constructed which will obviously be producing the other rings.

Anyway, as you can see a lot of thoughts got started because of this last episode. I'm looking forward to more, and season 2 is already filming. What a treat we have all been served. Anyone else have any thoughts?

Email ThisBlogThis!Share to TwitterShare to FacebookShare to Pinterest
Labels: Here are all the thoughts I have about Rings of Power that must be said, Lord of the Rings, Rings of Power, Tolkien, Udûn