AMC's reboot of Interview with the Vampire is a wonderful and modern adaptation of Anne Rice's most famous work. 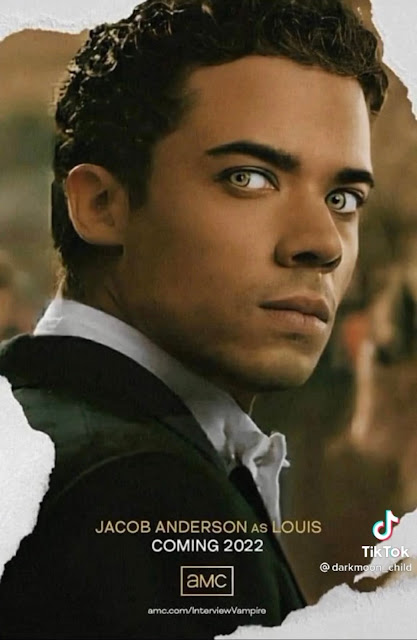 I have been watching Interview with the Vampire on AMC. Jacob Anderson plays Louis de Pointe du Lac, who is the star of the book and the series. The last time I saw Jacob, he was playing "Grey Worm" on Game of Thrones (which ended in 2019). I was always impressed with Jacob Anderson in the role of Grey Worm. To be clear, the acting on Game of Thrones was some of the best that has ever graced the screen. So, I'm sure that Jacob rose to the occasion being surrounded by people who took their characters so seriously and who played them with such intensity. Anderson was no exception to this as he played his guts out of the role handed to him by the showrunners as the leader of the Unsullied. This new role as Louis is such a departure from that previous one that I didn't immediately recognize him until about twenty minutes into the show.

Joining him in this sordid tale of vampire love is another actor named Sam Reid, who plays Lestat de Lioncourt. I have to think that Anne Rice would be impressed were she still alive. Sam seems like a perfect casting of this character as he fits the description of Lestat from the books so closely that I instantly recognized him. Louis of course (in the books) was not a person of color. But that doesn't matter as the most important aspect of Louis was his gentleness that is at odds with the violence that being a vampire demands. Anderson captures this perfectly, and I think being a person of color in the show fits the narrative rather well, especially with it being set in turn-of-the-century New Orleans.

As I watch this show, I can't help but think that this is the kind of horror that I actually like to watch. I'm not one for truly scary "gotcha moment" shows or movies that feature slasher-like villains that stalk their prey throughout a movie. This tale of lovely vampires circling one another in a romance that Dante could have written is right up my alley. The series is also peppered with Easter Eggs for those with a keen eye by virtue of its art and paintings. In the second episode, there's a painting that the journalist interviewing Louis sees, and he is told by Louis that it was painted by an artist named Marius. I know from the Vampire Chronicles that Marius is an ancient vampire that watches over Akasha and Enkil, who are the oldest vampires on the planet (former rulers of Egypt) and in possession of the primal power from which all vampires derive their lineage. Another reviewer spotted a Rembrandt painting in one of the scenes that was famously stolen from a museum, and which is still unaccounted for to this day. Knowing that makes me like the series even more, because it shows a careful deliberation on the directors of this thing to build the world in which these vampires inhabit.

To be fair, this version of Anne Rice's work is different and reinvented. It takes liberties from the original work to update and diversify it for a modern audience. This is just how things are being done now, and I do agree that this needs to be done. However, I wasn't really a fan of other versions of these stores that had been done thus far, including the Brad Pitt and Tom Cruise led movie where I thought Tom Cruise had none of the charisma that Lestat is supposed to have, and Pitt was kind of a letdown as far as his portrayal of Louis. So, to me, this new adaptation had only to be better than the garbage that came before, and in just its first two episodes it has done that. I think Jacob Anderson does a much better job of hitting the notes that I thought made Louis special in the original book. And Lestat...well, as I've said above...he's honestly perfect. In her original writings, Anne Rice flirted quite a bit with homosexuality, but she never really went all the way. The producers of this show embraced the gay, and the characters are unapologetically so. It is a thing that I find both amazing and pleasing, that we could get these fantastic gay characters who are so lovingly written about by their creator. I can't help but think that it was something Anne Rice would have wanted, if she could have just shed the fear of having her writing judged by bigots. This fundamental fear is probably at the core of every writer, but especially true to someone like Anne Rice who had achieved so much and at the same time, lived a life filled with various tragedies.

There are peppering's too of what I think are Anne Rice's end of life beliefs (she was a complicated person through and through). In the latter half of her life, she became a devoted Christian, moved away from New Orleans, and quite frankly, wrote a lot of books that I will never read, because they are filled to the brim with her faith. One of the ways this shows up in Interview with the Vampire on AMC is Louis hears the "heartbeats" of twins inside his sister's womb, and she's probably only six weeks pregnant. Science has shown us that there is no heartbeat at this time, and that it is (in fact) the ultrasound machine that creates a false heartbeat based upon sensory readings. In other words, the "heartbeat" heard on an ultrasound is completely faked by a machine. When I heard Louis saying he "heard heartbeats" I thought to myself, "That's the ghost of Anne Rice confirming heartbeats in a womb that shouldn't be there to pander to Christians who may watch this thing." But...whatever. It's not a hill I'm willing to die on and quite frankly, any movement of a person toward more progressive views is a victory against fascism and white nationalism.

Another departure from the books is to change the location of the interview. Instead of being located in the states, the interview with Louis takes place in Dubai. I thought this was an interesting choice, but it does put the action a lot closer to the Middle East where the oldest vampires in the world reside in Rice's mythology. I (for one) look forward to seeing who they have cast for Armand, who is a 350- to 400-year-old vampire if memory serves. For a lot of vampires, he's the oldest that they know, but that's mostly because the truly antediluvian vampires just aren't that present anymore. They kind of keep to themselves and rarely reveal their presence, pretty much shunning the younger generation who are their children. It is Lestat (in fact) who begins to wake them up with his love for music. In the timeline of Interview with the Vampire, Lestat is asleep (in vampire torpor), because he's gotten bored of everything and the thing with Louis has become unsatisfactory, and he felt he had no power to correct the course. So, he chose to go to sleep for a long time. What wakes him up is that the world's music changes to something that enchants him, particularly heavy metal and other kinds of things he's never heard of. It slowly brings him to consciousness, and he makes an appearance to tell his own story after Interview with the Vampire becomes a best seller and captures the world's imagination. Lestat (of course) thinks Louis is just whining away, and I think in his own right, he wants to "set the record straight."

It is Armand (in the books) who comes into conflict with Lestat and Louis, so he'll have an important and divisive role to play in this show, especially once Louis creates a child of his own in Claudia (who was a fascinating if not doomed character). Antonio Banderas in the movie from many years ago was (quite honestly) a terrible choice for Armand, even if I enjoy his speaking voice quite a bit. Armand needs to be young, almost too young which kinda scratches at that taboo that Louis commits when he makes Claudia. They will need to be careful with the casting of Armand, because they won't want him to visibly age over the seasons that they plan to do this thing. Someone like Tom Holland comes to mind, who can still play a seventeen-year-old even though he's like 26.

I also enjoy the pettiness with which the actor Sam Reid plays Lestat. Lestat was always one of the petty gays (a stereotype). He was stunningly beautiful, but an artiste in his own right. He was never a master of any art, but he was good enough to be pompous and full of himself and to know what true genius looks like. And like any artist in this range, he has strong opinions about things like opera. If it is performed perfectly, he's in love and humble and grateful. If it is performed badly, he's moved to anger. There's a scene in the show where the tenor of an opera he takes Louis to hits many flat notes, and Lestat cuts his own finger and puts a spot of blood on the musical score on each place that the tenor fails. Then afterward, he takes the tenor to his home and humiliates him by telling him what he did wrong when he sang those notes. And then he and Louis make a dinner of the tenor, and they draw it out all night long as a punishment for the many transgressions that he visited upon Lestat by singing a note poorly. Killing him is an act of mercy by Lestat, as he removes this horrible singer from ever gracing a public stage again. It is a monstrous act, but one that befits an ancient serial killer if his caliber.

And this (I suppose) is the horror of this tale. It is (in fact) the story of a serial killer...just one that we aren't used to seeing. It's funny that I can be so enraptured in the tale of Lestat and by extension, Louis, and that seeing them kill humans doesn't bother me. There is little difference I suppose from Lestat and Jason in the Friday the 13th franchise. However, to me they are leagues apart. Yes, they both kill. But Lestat is a romantic figure that is dreamy, chaotic, and powerful while the typical killer in slasher flicks is nothing but a monster. I struggle to understand why I like one so much more over the other. But I do. It's obvious that others do as well, because vampires are probably the most successful monster of all time.

Posted by Michael Offutt, Phantom Reader at 7:30 AM