The House of the Dragon spinoff feels less interesting than the original Game of Thrones even if it is a gorgeous production. 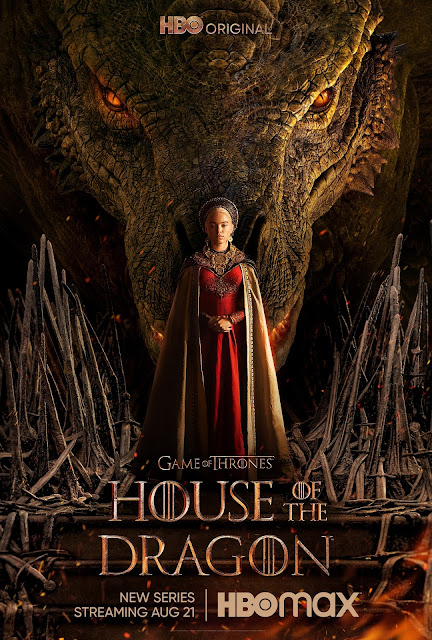 I've watched two episodes of House of the Dragon now, and I wanted to weigh-in on the Game of Thrones spinoff. However, it will be impossible to do so without spoilers. So, here is your spoiler warning.

House of the Dragon doesn't feel like Game of Thrones as much as it feels like Game of Thrones fanfiction, but maybe through the eyes of someone with less talent. The original story featured a huge cast of characters (many of them horrible), with each one starring in its own chapter or point-of-view. This technique allowed George R.R. Martin and by extension, the HBO team, to cliffhang each story and then go on to the next scene. With House of the Dragon the scene transitions are more like a regular tv series. They are just different points of view within the same large family. And the dynastic succession seems like a story that we've seen before. In some ways, having watched Game of Thrones, I wonder why any of these people don't see that the struggle for this uncomfortable chair that the king sits in is even worth it. Or maybe the ultimate lesson is that it is bad to be the King of Westeros.

That chair too has been changed a bit to make it more imposing. The steps leading up to it appear broader than they were in the original series. They are also covered in the littered remains of melted longswords and daggers no doubt taken from enemies and forged in a way to make the Iron Throne a bit of a contemporary art piece. The fact that the king regularly cuts himself on it and gets grotesque skin infections from the wounds seems lost to the common sense of those who should know better within the context of this fictional world.

The dragons as well seem a lot different. The ones that Daenerys rode were what I might consider to be a more traditional take on the mythological monster. Matt Smith from Doctor Who plays Daemon Targaryen, and his dragon appears to look more red and serpentine. Smith's character is utterly without charisma of any kind. This in contrast to Joffrey in the original who had charisma even if he was a psychopath. It almost feels like Matt Smith overacts in his Targaryen role so as to appear intentionally crazy, as opposed to the slow boil of crazy that we saw in other characters in the original series.

Where House of the Dragon does seem to land well is in the violence and gore that were hallmarks of the previous series. However, the original show covered quite a bit of territory. Seeking to maybe break new ground, the Westeros of centuries past shows itself in a tournament of bored knights eager to maim one another, and in a horrific birth scene that seems conjured to remind us all that many women prior to modern medicine did not survive a baby. And of course, there is plenty of social commentary on the state of the patriarchy in this medieval horror show, with baby boys clearly being more important than mothers and with a Targaryen in Harrenhal choosing a male heir over a female one.

Why anyone even continues to use Harrenhal as a dwelling is a question I never got answered either from the original series or the books. If you don't recall this specific castle in Westeros, it's a ruin of melted stone with many collapsed hallways and uninhabitable spaces due to dragon fire being used on its inhabitants. It would be little more than living out of a cave. There is always some noble squabbling over Harrenhal, yet no one ever gets around to renovating the place and fixing it up. I guess part of its ongoing appeal is its ruined appearance so that people can gape in awe and say, "This is what happened when Balerion the Dread melted the place." Balerion is the "big" dead dragon skull at King's Landing. I'm pretty sure Drogon ended up being that big at the close of Daenerys's storyline.

The new cast of House of the Dragon may settle into their roles yet. But it is difficult to see how it will maintain the epic feel of Game of Thrones without a spooky bad guy (the White Walkers). In fact, it may end up being more of a medieval Dynasty (this was a popular prime-time soap opera in the 1980's that featured various squabbling modern-day nobles backstabbing one another while living off their oil money). Dallas is another one of these dynasty-esque shows. So, House of the Dragon then is just a gussied up Dynasty featuring dragons instead of cars and with white wigs on everyone. Watching this show makes me think of the phrase "lightning in a bottle." It's obvious that there is more hunger for Game of Thrones. But there may not be more Game of Thrones to be had.

Sometimes, a good story is just that. It has a beginning, a middle, and an end. Stretching it out to give more to the people has always been a problem. Look at Jaws and Jurassic Park. Both of these are examples where the brilliance of the original made people go looking to recapture that "lightning in a bottle." And it never worked, even if those attempts produced money. Being profitable is not the same as being good, and I think we are in that territory when it comes to House of the Dragon. The thing has millions of viewers, and it probably always will dominate the ratings. But the magic of what made the original unique is simply not there, at least in these first two episodes. It would help things a lot if they actually had a supernatural villain to worry about (like the Night King) as opposed to watching a family destroy its enemies, many of whom reside within the same walls. Ah well...if any family was interesting enough to warrant a series, it was the Targaryens and their dragon lords.

Posted by Michael Offutt, Phantom Reader at 8:54 AM