She-Hulk on Disney Plus didn't waste any time drawing bigger connections to the MCU. 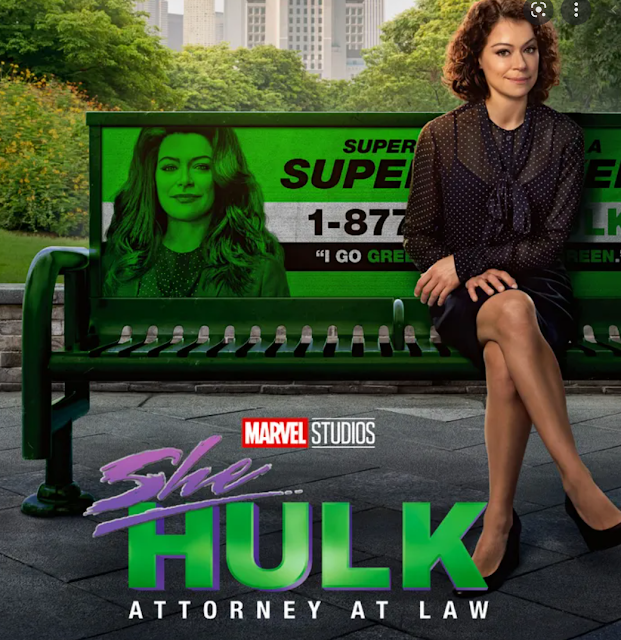 In today's post, I want to discuss the first two episodes of the new She-Hulk series. So this is your spoiler warning.

She-Hulk on Disney Plus didn't waste any time drawing bigger connections to the MCU (Marvel Cinematic Universe). Most of these Marvel series are not shy on this aspect. But right from the get-go we had a Sakaaran spaceship that resulted in Banner's niece getting infected with his gamma irradiated blood. And then from there, she's off to represent Emil Blonsky, whom we briefly saw in Shang-Chi and who had a larger part in an Edward Norton led Incredible Hulk movie that I believe I've only watched once, and it was well over ten years ago. That show was the one that had the Abomination in it. Honestly, I thought it would be a better movie. But it wasn't bad. I just remember that my interest waned in it once Edward Norton jumped ship for whatever ship he's sailing on these days. I used to like Edward Norton a lot (his performance in American History X is incredible). But I've come to understand that he may be a bit difficult to work with. I've worked with "difficult" folks, so I get it. My sympathies go to anyone that is forced to work with difficult, snobby, demanding people.

I am wondering who Blonsky's "seven penpals" are at this point. He mentioned it more than once when meeting with his lawyer (She-Hulk), and I'm thinking that the line felt "bludgeoning" enough for me to think that they are laying the ground for something. But my knowledge of Marvel is not good enough for me to predict what this "something" is going to be. I also wonder if Matt Murdock will make an appearance at some point seeing as he's a lawyer too. That would be an interesting turn of events and draw a nice connection to the Daredevil series, since we know that She-Hulk is now going to take the place of Mark Ruffalo in the Avengers movies.

Another of the things I find interesting about the character of Blonsky is that we learn (by the end of the second episode) that his participation in the underground fighting ring that was featured in the movie, Shang Chi was in fact an illegal appearance. Honestly, this is a no-brainer. So, I should have realized this. But I didn't. There were too many things I was trying to process plot-wise that this appearance by the Abomination seemed like just another interesting and humorous cameo. However, now that I've had time to process what we saw in She-Hulk I think there are more realistic real world implications.

For one, She-Hulk herself admits out loud that people need to earn a living. Money doesn't just drop from the sky, and she wonders if being an Avenger even comes with a paycheck. When I turned this tidbit over in my mind, I realized that even though Wong is now the Sorcerer Supreme, he might also need a paycheck. So I assumed that Wong is the one that is selling his magical talents to break random super people out of their prisons so that he can earn money in the fighting ring. Afterall, being the Sorcerer Supreme probably doesn't pay a living wage, and those tuna melts from the corner deli don't come cheap.

We don't need this explanation for Stephen Strange. He obviously has a good windfall fund somewhere since he was a rich doctor once, and the Sanctum Sanctorum has to be paid off in full (minus yearly property taxes). The idea that the Sorcerer Supreme has all these regulations and rules about using magical powers and artifacts and whatnot for fear of being magically corrupted, but these same rules do not include using your powers to make money for personal gain (in illegal fight clubs) makes me laugh.

And finally, these two episodes of She-Hulk make me wonder what the plans are for Banner. It seems obvious that they are removing him from The Avengers. But he is seen leaving Earth in a Sakaaran spaceship. So, I wonder if we are going to get a World War Hulk thing in the future? I'm thinking that the Sakaarians are taking Hulk back to the planet to meet his son and baby mama. Some band from Earth attacks (maybe the Illuminati) and Hulk's son and baby mama get killed. That makes Banner lose his shit, and then he comes back to Earth as an unstoppable angry man. Anyway, it's just thoughts at this point. But a lot of it was kicked off with these first two episodes of She-Hulk. They were pretty good. Anyone else wondering where they are going with this thing? Anyone else enjoy what they saw?

Posted by Michael Offutt, Phantom Reader at 12:20 AM

Email ThisBlogThis!Share to TwitterShare to FacebookShare to Pinterest
Labels: She-Hulk, She-Hulk on Disney Plus didn't waste any time drawing bigger connections to the MCU