The fourth season of Stranger Things managed to be both huge and an incredible feat for a television series. 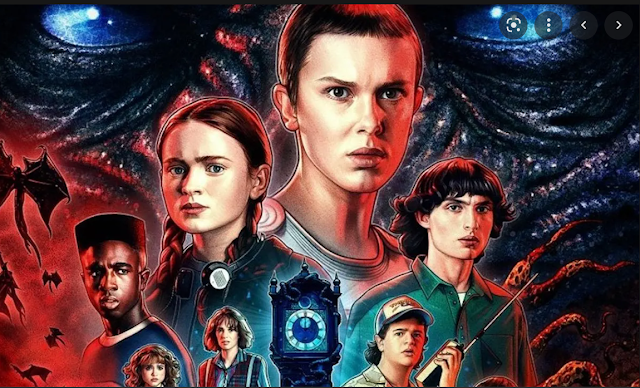 This last week, I finished up Stranger Things season 4 on Netflix. So, naturally, I want to talk about it. Here is your spoiler warning. Proceed at your own peril.

From the beginning, Stranger Things was an homage to the eighties: a place where kids could be endangered and killed (a thing that is pretty rare in today's cinema as if there is some taboo against this thing). But even Stranger Things went all-in on its body count. I was a little bit shocked that so many young people met their end in so many gruesome ways. But this is the 80's...where things like Friday the 13th and Halloween clearly established that it was fun watching teenagers get murdered.

Another big hit of the times was Fast Times at Ridgemont High. I'm not sure why there is so much nostalgia around this horrible movie, but I guess there is. It wasn't good, and it wasn't really funny at all. The main character in the movie if there is one (it's more a story of many teenagers at Ridgemont High negotiating relationships and drama with sex, stalker-esque behavior, and rapey scenes on full display) is Jeff Spicoli. Played by Sean Penn, I've actually never been able to take this actor seriously for the entirety of my life, whether he was married to Madonna or walking by the roadside in a war-torn Ukraine (2022). It's just too much chaos for my brain to process, and so this character and this actor just got swept into the dustbin that I keep in my brain, and he was never one of my favorites.

Well Fast Times runs a strong undercurrent in the fourth season of Stranger Things and it's in the form of the Surfer Boy Pizza delivery man and his VW bus, which (can I just say it?) seems to have shocking dependability. This Volkswagon bus drives everywhere across the west and beyond without breaking down, and it even crosses the desert on an unpaved road. I know from experience that the Volkswagon bus from this time period needed to downshift just to go over a speed bump. But...whatever.

Overall, I did like this season of Stranger Things. It compelled me to watch, and the episodes were long and intricate and they had great writing. The final episode of the season is a full blown movie, and I'm not sure how much this thing cost, but it couldn't have been done on the cheap by any means. It looks great, with Game of Thrones final season production values. I watched the whole thing with a new friend I made, and they made one comment I agree with: "It's interesting that this thing has gone beyond Hawkins and they've made it global).

So yeah, the events that originally started with this small town in Indiana could be felt all the way to Russia in a big way. And the Duffer brothers (who are behind this thing) doubled-down on their D&D nostalgia. As many of you know, I play Dungeons & Dragons to this day. So I'm all for seeing more D&D connections, even if they are in "name only" and have nothing really to do with what's going on. But it is fun to see the teens of this story try to describe what they are seeing and experiencing in terms unique to D&D and have nerds like me be in on the joke. Because Dungeons & Dragons is such an intricate part of their lives, these monsters that they are fighting take on the names of monsters they have faced in their games together. After all, Shakespeare did write, "A rose by any other name smells just as sweet."

The big bad of the fourth season is nicknamed Vecna, but his screen name is Henry. In Dungeons & Dragons, Vecna goes way back to the very first days of the game. He's a lich, which is a kind of undead wizard, who is bent on destroying the world. In Stranger Things the "wizards" are the people who have psychic powers that can move things, rip things apart, breach dimensions, and do essentially whatever the writers want these powers to be able to do. We haven't seen "fire starting" happen yet (think back to Stephen King's pyromancer in the book Firestarter), but I'm sure if they needed this plot device it would show up. So, Vecna is one of the same batch of people that Eleven is...only he's the original one, whereas Eleven is "number eleven" in a group of children who all manifested lots of different powers due to unethical experimentation by boogeyman government types. We get a lot of backstory in season four, and one of these is explaining the relationship between Jane (who is "Eleven") and Henry (who is number "One"). The most important reveal is that Henry got thrown into another universe by Jane who overwhelmed him with her own powers. And this resulted in Henry becoming gross looking, burned like Freddy Kreuger, and then otherwise corpsified without (for some reason) killing him off because I guess the bodies of wizards can withstand these kinds of inhuman mutations.

As a villain, "Vecna" was very effective, and I enjoyed him a lot more than previous monsters that they have used. I think the reason behind this is that he had good dialogue, essentially being human for most of his life. There was also a much bigger reveal that interwove with all the previous seasons in a kind of Rowling-esque way: Vecna was responsible for the "Mind Flayer." On this particular revelation, I'm a bit torn. The original idea that the Mind Flayer was a highly intelligent monster that ruled his dimension for eons was much bigger than the thing uttered by Dustin, "Oh! EVERYTHING came from this one guy." It...I don't know...made the universe feel smaller. But whatever. Any real criticism I have about this is small. The fourth season was a tour-de-force.

So the final boss in Stranger Things seems to just be a psychic serial killer. I may have wanted an alien eldritch abomination, but in the end, this isn't the direction that the Duffer brothers wanted to go. I can still appreciate what they accomplished here, which was a really big fourth installment of a beloved series that (I think) overall was a pretty incredible feat. They managed three different groups of people in three areas of the world, doing three different things. And it didn't really seem tedious at all. Each storyline had action-packed elements that not only peeled back the layers on these characters backstories, but gave us a resounding cliffhanger where the stakes are literally world destroying unless the kids from Hawkins can somehow find the heart (and abilities) to take Vecna down. I'm ready and primed for season 5 (the last season) of this show.

Email ThisBlogThis!Share to TwitterShare to FacebookShare to Pinterest
Labels: Stranger Things, The fourth season of Stranger Things managed to be both huge and an incredible feat for a television series