Netflix's Resident Evil series is entertaining but requires a lot from your suspension of disbelief. 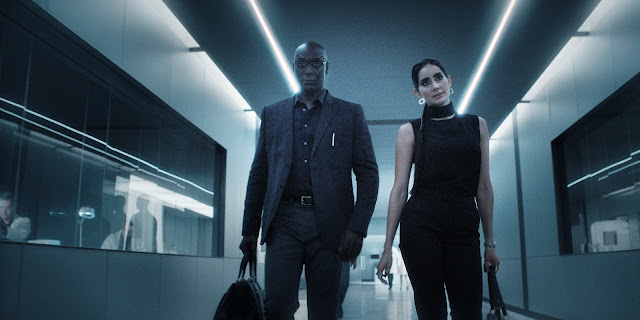 Right after I finished watching Stranger Things I dived right into Resident Evil, which is another Netflix series that launched in late July. I never played the games, and I've only partially seen a movie here and there that came out over the years. I decided that I'd like to revisit this story, and I'm glad that I did, because I was thoroughly entertained. There are some spoilers ahead as I talk about what I liked and what I didn't like about the show, so here's your warning.

One of the things I found jarring about the show was the back and forth storytelling that took place. Essentially, we follow a pair of characters before the world ends and after the world ends. In one scene they are teenagers, in another they are adults and at odds with each other. And each scene spent with these characters is maybe ten minutes before switching to the other timeline. It's back and forth, constantly. And they tried their best to break during a cliffhanger, so that you'd be thrust back into this other timeline only to have it end on a cliffhanger so that you returned to see the previous cliffhanger resolved. I get why you'd want to do this to keep people watching the show. But I'd already committed to watching it, and I just wanted a lot of storylines or scenes to play out before switching to this other one. So yeah...that didn't work for me as much.

However, the show also had a lot of interesting things going for it. Right off the bat, we saw a huge caterpillar monster the size of a kaiju that really seized my attention, and there were plenty of zombie mobs that reminded me of the best parts of The Walking Dead. So the show had production values that were on track with some of the best things I'd watched in the past.

Additionally, the characters in themselves were compelling. One of the main characters named Albert Wesker was really interesting. Since watching the show, I've come to understand that this character is essential to the games (which I never played). But I knew nothing going into this. Instead, I was rather pleased with the originality of this character, as he's a conglomeration of multiple clones with whom the protagonists interact during the lengthy fall of civilization. Wesker is this "troubled genius" type scientist who is basically a property of the Umbrella corporation, which is the kind of company I would envision run by a Dr. Mengele-type personality. Or (maybe to explain it better) it's the kind of company that Nazis from Hitler's Germany would create were they given no oversight and no accountability and unlimited money to do whatever they wanted to do. They are really bad.

I was also really surprised about the soundtrack. In the first episode there's a lot of Billy Eilish, who is a contemporary singer that is really popular right now. One of the main characters is also named Billie, and she actually looks a bit like Eilish does with the multi-colored hair. This had me wondering why they wanted to tie this zombie-apocalypse tale so closely to this really popular singer...but here we are. It was kinda like watching some weird fan-fiction of what it would be like to have a Billie Eilish story told in Resident Evil style. I wonder if the singer has watched it, and I wonder what she thinks of the more than obvious homage to her. It also makes me question if they wanted to get Eilish to actually play that part. Did they ask her and she said "no?" In any case, it's a creative choice that was in the back of my mind the entire time I watched each episode.

One of the things I found puzzling was that the world kind of ended due to Umbrella Corporation's experiments. This fact is true worldwide no matter where you go. What I don't get (and what never got answered) was why (after 20 years) has the corporation been allowed to grow back into a multi-national conglomerate that people are ready to trust with experimental pharmaceuticals again? I mean...there's a line in the movie where the protagonist threatens to expose what Umbrella has been doing to bring the wrath of the people against them. I was like...this makes no sense...aren't the people already mad at Umbrella corporation? In order to make this make sense, I assumed that the corporation is so powerful it is essentially an authoritarian world government that holds onto its position at the top of the pyramid tenuously. But how would you rule a planet as large as earth, especially when you are having difficulty just managing vast roving multitudes of zombies?

All of that aside though, Resident Evil entertained me. So, if you are capable of placing your brain on the shelf for a while and just enjoy a great dystopian thriller, I think this might be for you. And there's plenty of monsters in every episode. They spare no expense with the horror and the monsters, and they vary them up from scene to scene so it's not just another zombie. You truly get some some crazy (and hair-raising) stuff that (I guess) is because the "T-Virus," which is at the center of this show, is a drug that can do whatever the writers need it to do to increase the body horror.

Anyone else take the time to watch Resident Evil on Netflix? Anyone else a fan of this franchise? On Friday I'm going to talk about The Gray Man which is a movie on Netflix.

Posted by Michael Offutt, Phantom Reader at 7:09 AM

Email ThisBlogThis!Share to TwitterShare to FacebookShare to Pinterest
Labels: Netflix Resident Evil, Netflix's Resident Evil series is entertaining but requires a lot from your suspension of disbelief, zombies