The Gray Man was a pretty great action flick starring the hottest men in the world. 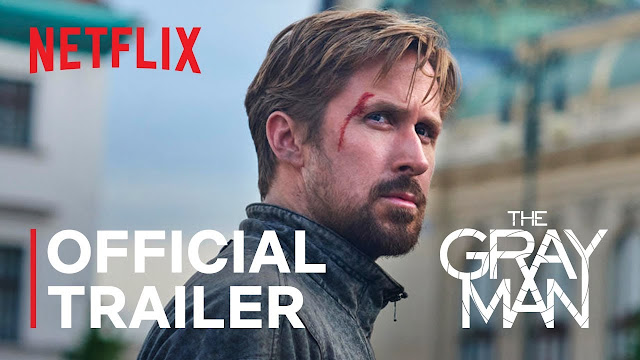 I recently watched The Gray Man on Netflix. If you don't want to be spoiled, you should probably head on out now. Otherwise, tune in for what I have to say about this show.

I was impressed. The show had both Ryan Gosling and Chris Evans in it, and I heard it cost in the neighborhood of $200 million. That's some really impressive dough considering that this was available to watch on Netflix (I wasn't even paying attention to whether or not it was in theaters for a week). I love both Gosling and Evans. They're two of the hunkiest most attractive men in the world right now. Having both of them in a show pretty much sealed the deal for me in making it a priority watch.

So, in this show, Gosling plays the protagonist while Evans plays the sociopathic villain. It wasn't a role I was used to seeing on Evans, and I thought he played it rather well. I also learned that this movie was made after a "Gray Man series" of books. The movie explains within its opening credits in a prison visit by Billy Bob Thornton (who is an agent looking for talent to perform risky killings for a shadowy government agency) that they need someone to "work in the Grays." This roughly translates to, "If you get killed or caught, we won't help you one bit, and we won't acknowledge that you work for us." But from reading about the books online, I guess it is called "The Gray Man," because his greatest asset is that he is physically unremarkable in every way so that he can pass for multiple ethnicities and nationalities and no one ever remembers what he looks like.

So...even if he's physically not your cup of tea, no one has ever described Ryan Gosling as physically unremarkable. To me...he's the living embodiment of a Greek god brought to life, standing 6'1" with incredible eyes and a smile that would shame a shark. You'd remember his mug anywhere, and I'd remember those triceps even if I saw him from half a mile away. So yeah...maybe fans of the book will be upset that the casting wasn't quite right. But I enjoyed the hell out of it. It's essentially the same mistake as people casting Tom Cruise as Jack Reacher, who I guess is another role where the protagonist is physically unremarkable. But Hollywood seems to ignore those details. And who really cares, right? I mean some fans will be upset, but the author gets bank and gets to see his creation put before others with the most attractive people in the world playing the parts. I know I wouldn't care if this happened to me.

All that being said, I kinda thought Regé-Jean Page was a total miscast. We last saw him as "The Duke" in Bridgerton, and he did a superb job in that role. In this one, he wasn't menacing enough. He didn't have enough intimidation and force of personality to make me fear this guy. His overall performance seemed a bit campy...or at least on the verge of this. But I still enjoyed it.
I also see how the Fast and Furious films have really influenced action movies. In this latest entry in the action genre, the stunts are similar in fashion to what you'd see in that other billion dollar franchise. I don't know if that's a good thing or not. Sometimes I miss the old action movies like Big Trouble in Little China. Things were so much more believable in that film, which seems ironic if you take a moment to think about that statement.
Anyone else take the time to watch The Gray Man? If so, what did you think?
Posted by Michael Offutt, Phantom Reader at 12:03 AM

Email ThisBlogThis!Share to TwitterShare to FacebookShare to Pinterest
Labels: Netflix, The Gray Man, The Gray Man was a pretty great action flick starring the hottest men in the world