In the new Obi-Wan Kenobi series the powerful jedi master we all knew is just a shell of his former self. 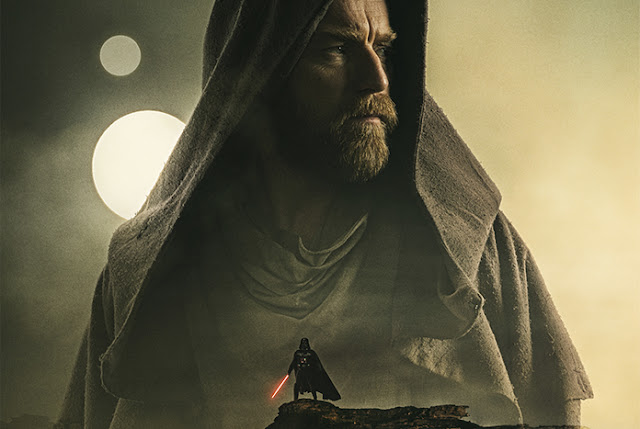 What can we say about Obi-Wan Kenobi? First, there is a spoiler warning, as I'm going to talk about Obi-Wan here in this blog and air some of my feelings about the show.

I really don't know what I expected from this series. It's more Star Wars which (in my opinion) is always good. But did I expect that Obi-Wan was going to be so weak? So unsure of himself? So...not the Jedi Master I remember. I watched Obi-Wan (just like legions of other fans) secure his place in Star Wars history by being a blazing lightsaber that never waned. He took down Anakin Skywalker, who had chosen to join the emperor...uncompromisingly so...and on his way there a thousand stories were told by Dave Filoni in Clone Wars. Obi-Wan was a badass. In every scene he was a titanic figure that meant business everytime he appeared.

So...why didn't I expect him to be broken the same as Luke Skywalker was broken in The Last Jedi? Why had I deluded myself that...yes...he would be on Tatooine watching Luke but that his entire outlook on life had left him with feebleness and uncertainty? He buried his lightsaber in the desert, he was working in a meat packing plant, and he was a lonely and obviously smelly hermit. It was obvious that he hadn't used the Force in years. He was so completely broken that he refused to help a force-sensitive Jedi to escape the Inquisition, gave that Jedi incredibly bad advice, and then he had to literally be dragged kicking and screaming to save Leia. This was not an Obi-Wan that could ever have protected Luke, which is what he had been tasked to do. So what was he even doing there? The Inquisitors could have run him over at any time...easy.

In this timeline running up to A New Hope, the 1977 release of Star Wars, I had previously thought that the most powerful "Jedi" left in the galaxy were Yoda and Obi-Wan. But that is completely untrue. The most powerful "Jedi" left were Yoda and Ahsoka Tano, even though Ahsoka walked away from an appointment within their ranks. She had the title, she just refused to take it (but that still counts in my book). Obi-Wan (at this time) was nothing but a broken foolish man who could maybe do some parlor tricks if he concentrated hard enough. When Vader appeared on the mining colony striding in at the peak of his deadly powers, Obi-Wan cowered in fear of him. All he wanted to do was run. And he could barely hold his lightsaber, because his hands were shaking so much. What the hell? Look...I get it. We're supposed to get from the Obi-Wan that killed Darth Maul in his youth to the old man who can barely do anything in A New Hope. That is the final destination for this train. However, I wasn't expecting Obi-Wan to fall off the horse quite so fast or with the lack of grace that (I guess) comes with the knowledge that you raised a psychopathic murderer and unleashed him on your entire civilization.

Don't get me wrong, I'm still watching the show. I know that there will never be another blazing lightsaber battle between a Sith Lord and Obi-Wan Kenobi that harkens to bygone days, where I'm like, "Yeah...that's the hero I remember." And that just makes me a little sad for this character, which is (I suppose) how all of us are supposed to feel. He failed in a huge way, and he's obviously never going to forgive himself. So, he's going to go down with the ship. It's a good thing that Dave Filoni has created some characters we can really sink our teeth into and cheer for as the old guard has its sun set upon it forever.

Anyone else out there watching Obi-Wan Kenobi? Am I being a bit harsh here? Let me know in the comments.

Posted by Michael Offutt, Phantom Reader at 1:02 AM

Email ThisBlogThis!Share to TwitterShare to FacebookShare to Pinterest
Labels: In the new Obi-Wan Kenobi series the powerful jedi master we all knew is just a shell of his former self, Obi-Wan Kenobi, Star Wars