The Locke & Key season 2 trailer for Netflix seems to channel a bit of Sauron forging the One Ring. 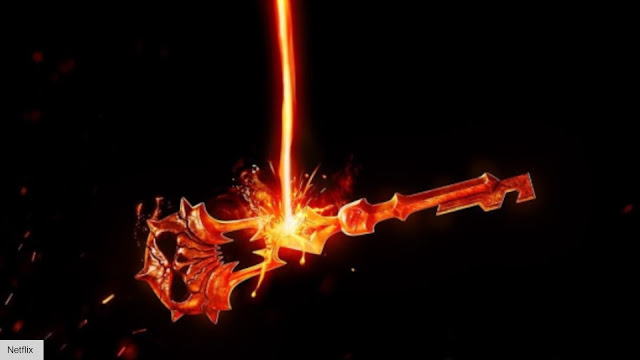 Just in time for Halloween, the second season of Locke & Key is about to drop according to the shiny new trailer that aired online this week. I really enjoyed the first season of this show on Netflix (which seems like it aired a loooong time ago), and I believe it is from Joe Hill, who is the son of Stephen King and (honestly) a doppelganger for the aging horror author. As far as Joe's mind goes, well it seems to me that you can truly inherit genius (or insanity). Look (and for clarification) I wouldn't want to live in Stephen King's mind. However, I'm glad that someone does, because Stephen has been a great entertainer of people for generations. And now, Joe Hill appears to be carrying on that legacy just fine.

Joe's other offerings like NOS4A2 kept me on edge as well. I watched some of the series on Hulu, and I do intend to get back to it. But what I did see kept me wanting more. However, I'm not big on horror unless it also manages to combine fantastic elements (or science fiction). It's why I can watch Aliens type movies without feeling anxiety. But I can't (for example) watch Halloween or Malignant.

In the trailer (which I will link below), Dodge (played by Laysla De Oliveira) is in the form of Gabe (Griffin Gluck), and another demon in the form of Eden (Hallea Jones) forge what appears to be a dangerous new key. The scene reminds me a lot of Sauron forging the one ring in the fires and forges of Mount Doom.

People who have read the original comic book series by Hill and Gabriel Rodriguez (artist) have claimed that the series has gone off the rails from the original source material, which honestly isn't surprising. I haven't read the comic book series. And that probably works in my favor, because I think the show is one of the best offerings on Netflix.