Star Trek: Prodigy looks to explore even more of the Delta Quadrant in October with a hologram Janeway providing advice to a bunch of kids 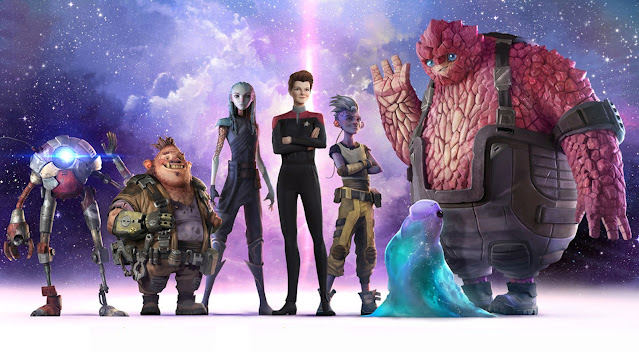 There's a lot of new Trek happening on Paramount+ (formerly CBS All Access). With Lower Decks solidly marching on with its second season, I'm also aware that Star Trek: Prodigy, the second animated series in the shared universe on Paramount+, is due to drop October 28th.

Star Trek: Prodigy's plot is going to have a pretty basic framework that can be built out as needed for some truly entertaining episodes. The crew (with the exception of the hologram Janeway providing advice) consists entirely of teenagers who find an abandoned starship and go flying around the galaxy in search of adventure. All of the characters are from the Delta Quadrant, and the show is set just a few years after the USS Voyager's return home.

The synopsis reads like this: five kids are incarcerated on an obscure planet in an uncharted part of the galaxy. They escape from their imprisonment and race across the planet to find a defunct starship buried in the planet's surface. They enter the ship, but are unable to make it work. With prison guards hot on their heels, they suddenly stumble upon an Emergency Training hologram in the form of Captain Janeway.

There's Gwyn, a 17-year old member of the Vau N' Akat, which is a new race to Star Trek. She was raised on her father's desolate mining planet and grew up dreaming of exploring the stars.

Next up is Jankom Pog, who is a Tellarite. Pog loves a good argument and regardless of his own opinion, he'll always play "devil's advocate" for the sake of hearing all sides.

There's also a purple alien who race has not been released yet. The name attached to this alien is Dal, who fancies himself a maverick and holds strong onto his unwavering hope even in the toughest of times.

Murf is an indestructible blob with really good timing.

There is an 8-year-old Brikar (race), which is a hulk-like alien. The name of this character is Rok-Tahk, and they love animals.

And there is a Medusan named Zero. From the original series, these are a non-corporeal and genderless energy-based life form known to cause insanity to any humanoid who gazes upon their natural form. Zero wears a containment suit to protect those around them.

Below is the first trailer for the show. I'm kinda excited about this one....

Posted by Michael Offutt, Phantom Reader at 7:12 AM