Marvel Ultimate Alliance 3 is a ton of fun to play with friends. 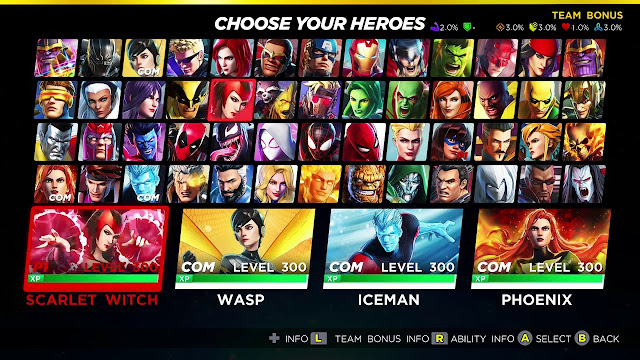 A little over a week ago, I started playing Marvel Ultimate Alliance 3: The Black Order on the Nintendo Switch. I'm "late to the game" on this one, but better late than never, right? I heard about this game only because I hadn't used my Switch in over a year, and my friend Meg expressed a desire to continue to play a Breath of the Wild game she'd started about a year earlier. So, as I watched her play the game, I looked online for anything that might play more to my interests. I've always liked cooperative games (games you can play with other people in the same room as you) to ones that you play alone on a computer or a game platform like the Nintendo Switch. And that's when I discovered that waaayyy back in 2019 (before Covid was even a thing...can you imagine?) this game came out and was rabidly enjoyed by its fanbase. So, I bought a copy and started playing it with friends. And I'm here to tell you that I've had SO MUCH FUN.

If you're a comic book fan, you really should give this game a go. You can play up to 80 characters in the Marvel universe, and like I said above...you can team up. Each character starts out with a pretty basic superhero package, but you can level your character up by performing cooperative missions called "Infinity trials" and unlock all kinds of nifty stuff. There's a whole laboratory section of the game that you can go into to further customize the synergies and power that your four person team can do. If you pick characters that have similar abilities (Hulk and Thor for example are both "heavy hitters") this allows you to synergy your attacks together for spectacular amounts of damage against the foes on the screen. The game also has a level cap of (I think) 300, and you start out at level 6. So...you can play for a really long time, and there's always more to explore. My friend and I have been playing a game for over a week now and we are like level 35 now, which shows you just how far we are into the game.

Right now, I'm alternating between Spiderman, a hero called Crystal, Wolverine, Captain America, and Nightcrawler. I've wanted to play Doctor Strange, so I'll probably play that character next, but we just unlocked Cyclops and Colossus so those are strong contenders for wanting to explore. If you think that most video games might be too complicated for you, and you are intimidated...I would say, "I think that this will not be a problem with Ultimate Alliance 3." The reason: both Meg and I are old fuddy duddies, and we don't have the best response time on the controllers. So we play on friendly difficulty level.

Aside from that, the strategy of playing comes more from timing, team composition, energy management, and just dodging enemy attacks. There are no fancy button combos to memorize or special attack patterns to use on the joystick. There are also some really challenging puzzles, and some mechanics that you must use in order to bring down bosses. One of the more difficult bosses that we faced was Dormammu in the Dark Dimension. You had to hit him with rocks that you picked up, but you needed to charge the rocks with Dormammu's own attacks before you threw them at him, or they would do no damage. So that was a lot of fun, once we realized what we had to do.

As for the story, it is a ton of fun. The big bad is Thanos, and he's trying to collect the Infinity Gems. In this alternate universe, the Infinity Gems are scattered through the cosmos and we are trying to get our hands on them before Thanos and his Black Order can beat us to it. I imagine that there will be a pretty incredible boss fight with Thanos before this is all over. There were also three expansion packs that are available for the game that I purchased and downloaded. These unlocked the Fantastic Four, some more game to explore in Doctor Doom's kingdom, and a bunch of new abilities and alternative costumes for characters.

Anyone else out there own a Switch? If so, have you played Ultimate Alliance 3? Please let me know in the comments.

Email ThisBlogThis!Share to TwitterShare to FacebookShare to Pinterest
Labels: Marvel, Marvel Ultimate Alliance 3 is a ton of fun to play with friends, Video Games